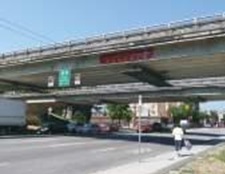 Vancouver city councilors have recently decided (by a 5-4 vote) to tear down the 44-year-old elevated Georgia and Dunsmuir viaducts, replacing the structures with a new at-grade road network, expanding Pacific Blvd. to six lanes, with a 13-acre park and denser False Creek office/condo communities.

“We’re at the edge of a really exciting opportunity,” Mayor Gregor Robertson said, describing the viaducts as “a relic of a failed transportation policy.”

Council has asked planners to provide a clear plan on how to fund the estimated $200  million  removal,  a process that could take 18 months.

The planners believe that developer contributions and land sales or city property leases will cover the costs generating an additional $100 million to construct amenities such as a school or daycare.

The viaducts, which replaced an even older Georgia Viaduct in 1979, could technically remain standing for a few decades, but city planners say the city would need to spend upwards of $50 million to maintain them so they wouldn’t collapse in an earthquake.

Notably, Green Party Coun. Adriane Carr sided with the right of centre Non Partisan Association councilors in oposing the removal, calling it an “incredible gift to developers.” She said in the  process,  developers’  interests trumped citizens’. “They stand to make an enormous amount of profit.”