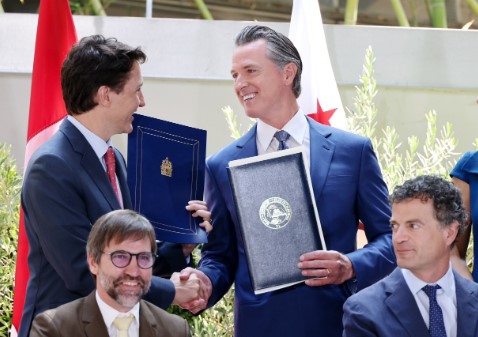 “Canadians and Californians share a commitment to building a clean, strong future,” Trudeau said. “Today, as we launch a new partnership on climate action and nature protection, we’re teaming up to deliver the clean air, healthy environment, and good jobs our citizens deserve. I look forward to everything we can do next to deepen our shared work.”

The MOC furthers climate objectives through sharing information and best practices. Canada and California also agreed to convene other like-minded partners at UN Climate Week in September, to drive shared work on wildfire and forest resilience.

California is a $3.3-trillion a year economy – the fifth-largest in the world, and a “stable partner” whose efforts to address climate issues and pollution standards have been influencing other states and countries, including Canada, for decades.

“We punch above our weight,” Newsom said, describing the state as a “stable partner” whose regulatory reforms have stood the test of time and the political whims of the electorate. “We carry a lot of weight as it relates to low-carbon green growth, as it relates to efforts to change the way we produce and consume energy – regardless of who’s in the White House.”

Trudeau said Canada will always find favour with a partner that’s willing to make progress on issues of shared significance.

“Canada has always been a country that engages in the world, and whether it’s engaging with like-minded countries or like-minded states like California, we’re just there to get things done,” Trudeau said. “When we find alignment on so many things – as we always have with California, but as we specifically have under Gavin Newsom’s administration – we jump on it.”

Trudeau delivered an impassioned defence of his government’s efforts to rebrand Canada, a country economically dependent on its fossil-fuel resources, as a champion of tackling climate change. It’s precisely because of that reputation as an oil-producing nation that Canada has extra credibility on climate issues, Trudeau said.

“Moving forward on climate change is really hard for us. We have a thriving fossil fuel industry in our country at a time where the world continues to run on fossil fuels and will for a number more years,” he said.

“The fact that we have that means it’s all the more important for us to step up and show real leadership on fighting climate change, and that’s exactly what we’ve done.”

Canada has committed to reducing methane emissions, which can be between 20 to 80 per cent worse for the atmosphere than CO2, by 30 per cent by 2030.

The White House readout of  their meeting said they “discussed the potential of developing critical minerals in both countries,” as well as “joint efforts” to protect supply chains from “external shocks.”

Trudeau also made the point that U.S. duties on Canadian softwood lumber “are placing further pressure on home prices and affordability.”