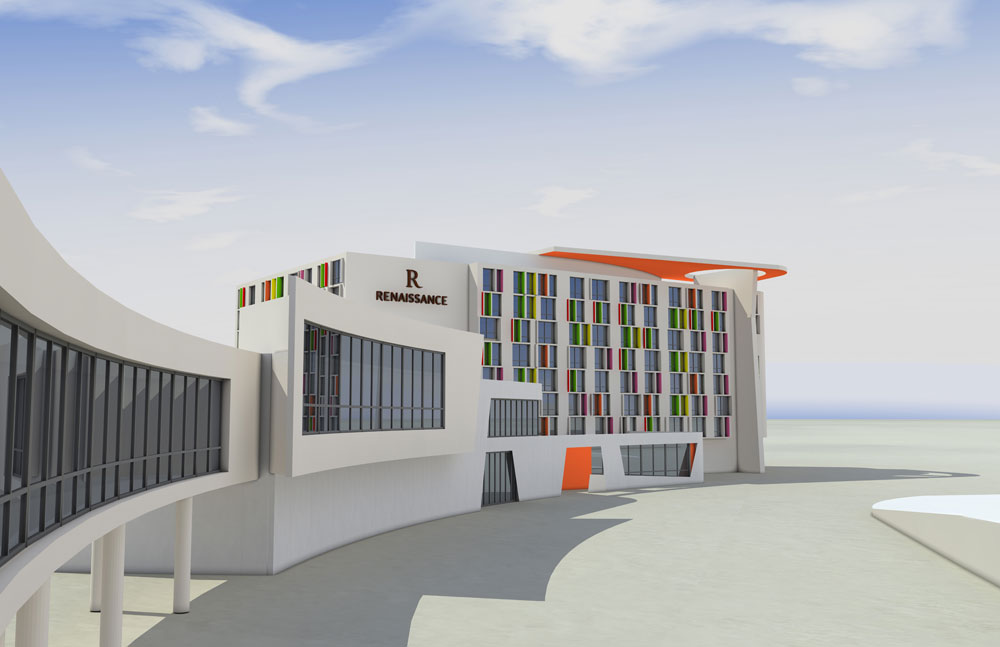 Edmonton will soon be home to Canada’s third Renaissance hotel and the only Renaissance in the world directly linked to an airport terminal.

The Renaissance, a Marriott brand, will have 213 rooms on eight floors, including a 1,200 sq. ft. presidential suite, 11,000 sq. ft. of meeting space, a private club floor with club lounge, and the HALO (an acronym for High Altitude Low Octane) restaurant, which will serve upscale comfort food created by local celebrity chef Andrew Ihasz.

Renaissance Edmonton Airport Hotel sales director John Hollman says the Renaissance brand focuses on lifestyle. “The hotel will be trendy and modern with fresh flowers in the lobby and unique features in the rooms,” he said. “Valet service at the entrance, a concierge to help people find hidden gems within the city, and a calendar of live music and events are just some of the features that make this brand special.”

The property is owned by Platinum Investments Ltd. The building had originally been slated to open as a Courtyard by Marriott but part way through construction the owners decided to change to the more upscale brand.

Michael Goldsmith, president of Goldsmith Consulting Design Associates (GCD), said the change has created some challenges, including keeping trades engaged and the question of what to do with already-manufactured supplies.

“Construction began on this in late 2011 and by August 2012 the shell was completed in less than 10 months,” he said. “The changeover to Renaissance came after that.”

Goldsmith said all of the hotel’s finishes and case goods needed to be completely changed.  Other changes included modifying bathrooms to from tubs to showers (80 per cent of suites will now have showers instead of tubs following a preference by travellers).  As well, the public spaces required a complete make-over.

Goldsmith says the team is trying to use and adapt as many of the original materials as possible without starting from scratch and that all of the trades have stepped up to get the work done.

An elevated climate-controlled pedway will connect the hotel to the airport, a feature which shows the hotel’s proximity and reveals another potential problem.

“We are within 250 ft. of a gate so sound is an important consideration,” Goldsmith said. “The hotel is laid out so public spaces are closer to the airport and act as a buffer between the guest suites, which are located on the far side and we used customized double-paned glass, which will help minimize the airport noise.”

Though the project is not seeking LEED certification, Goldsmith says energy efficiency and elements like using mostly-local materials and high efficient mechanical systems including a heat wheel recovery system would count high towards LEED consideration.

The hotel is the first Canadian building constructed with  the “Girder Slab” system, selected for its speedy installation and because the system solved a key issue. “The hotel is under tight height restrictions because of its proximity to the airport,” Goldsmith said. “Using  traditional construction we would have only be able to build to seven storeys but with this system were able to get in eight.”

Goldsmith says the integrated steel beam system, which uses hollow core planks, also allowed each floor to be constructed in 10 to 13 days without shoring and heating and hoarding in the winter, compared with the weeks that would be required for a conventional concrete pour. “This system is a bit more expensive but when tasked with construction through the winter, it quickly becomes an affordable option.”

Goldsmith describes the hotel as very modern looking and “kind of a work of art in itself.” The hotel is scheduled for a soft opening in the fall of 2013.