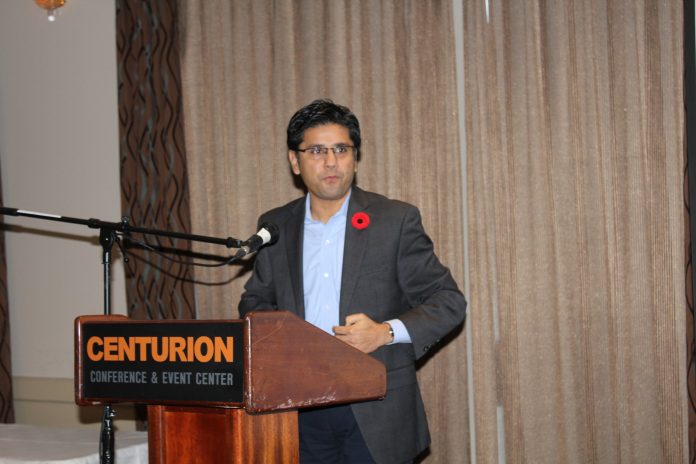 “It’s a piece of legislation that is extremely important,” he told a gathering at the Greater Ottawa Home Builders’ Association (GOHBA) late last year. “It should be called the Construction Act, because it regulates how financial action in construction projects takes place.”

The government, in preparing to implement recommendations from lawyers Bruce Reynolds and Sharon Vogel’s Construction Lien Act Review, is continuing “consultation with all of you, all of you in the construction sector.”

Right now, the government is focusing on modernizing the regime about liens and holdbacks, introducing prompt payment regulations and simplifying adjudication.

He said the government is co-ordinating more than a dozen meetings “with essentially all of the provincially based organizations representing views of the construction sector from all walks of life.”

“We’re getting their specific ‘asks’ from their sectors’ view of what is important and what they would like to see or not see in the report.”  The government is also receiving written submissions.

“We’re continuing to work with Bruce Reynolds and Sharon Vogel,” Naqvi said. “The advisory group they created is affiliated with all the partners in the sectors as a check-in point,” he said. “This is so we don’t miss the detail part in consultation, (and) when we are actually writing the legislation we will be writing it in a way that works for you.”

“I hope we can bring a modern piece of legislation that can serve as well for years to come,” Naqvi said. “(It will) allow you to run your businesses and things you build, homes and businesses, with less burden and in a manner where (businesses) get paid for the work they do, with more stability and certainty in the construction sector.”

In an interview, Naqvi declined to say whether the government will ignore or alter some of the Construction Lien Act Review’s recommendations. “We are getting into some of the specific details,” he said. “So, because I’m still getting that feedback, I’m not in a position to tell you what may be out and what will be left in.”

“We have to be very mindful that if we take one piece out versus the other piece, what is the impact to the entire system. I’m very mindful of that . . . we don’t unbalance the cart. And we keep coherent systems in place that will work from beginning to end.”

At the Construct Canada show in Toronto, a panel group of lawyers representing different sectors of the design and construction community reviewed the impending legislation that will integrate lien rules, prompt payment requirements and a rapid acting dispute resolution system.

“What about the interplay between all that,” asked panel moderator Glenn Ackerley, a construction lawyer and partner at WeirFoulds LLP. “Nowhere else have lien rights and prompt payment rights (been put in the same legislation). How do they go together?”

The panelists discussed the interplay between the different industry issues and forces – including provisions that would allow for parties to contract out of parts of the legislation. TCA president and CEO John Mollenhauer asked if, for example, a general contractor could insist on a provision that would result in zero interest payments for overdue accounts, defeating one of the remedies if a contractor or owner fails to pay invoices in a timely manner. Ackerley said this would not be the case; the minimum interest rate would be the statutory interest set through the provincial courts.

However, owners, subcontractors and suppliers could contract for different invoicing cycles, setting for example, a quarterly or milestone based model before the downstream supplier could issue an invoice. Once that invoice is issued, it would need to be paid within 28 days unless the service purchasers could demonstrate that they, themselves, had not been paid.