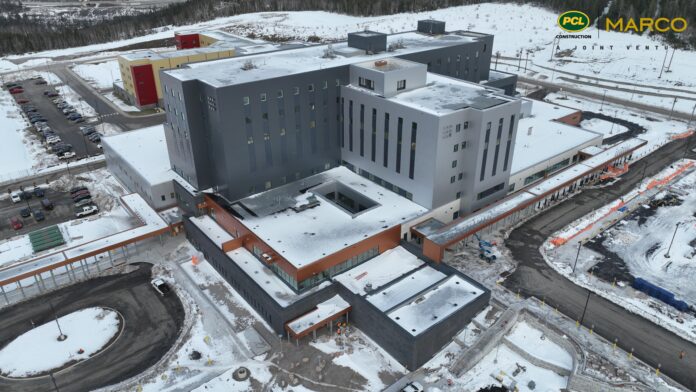 PCL Construction and Marco Group Limited have donated $11,000 to support victims of Hurricane Fiona in Newfoundland and Labrador.

The firms have joined forces as the PCL-Marco Joint Venture team building the Corner Brook Acute Care Hospital in the province. The September hurricane was one of the worst storms to ever hit the region and in response to the widespread damage the JV organized a fundraising campaign throughout the month of October, according to a news release.

In September 2022, Atlantic Canada was hit by one of the worst storms to hit the region, with record-breaking winds and devastating effects. To provide relief to the local community, the PCL-Marco Joint Venture team building the Corner Brook Acute Care Hospital organized a successful fundraising campaign throughout the month of October. The fundraiser included a raffle prize draw and direct donations to the cause, raising over $11,000 dollars.

“The Corner Brook Acute Care Hospital team has experienced firsthand the sense of community Newfoundland and Labrador shares, especially in times of need. Hearing how this hurricane impacted our local trade partners and their families hit close to home. It was important for us to find a way to support the people who have welcomed us and work alongside us every day,” said Jenn Sutherland, PCL-Marco superintendent.

The raffle raised a total of $6,000 in just a few weeks. The remaining funds were contributed through direct donations to the Red Cross and the Atlantic Edge Credit Union in Port aux Basques.

“A fundraiser was a great way to show support from the project and have the workforce, project team and trade partners engaged and excited to participate,” said Charles Gunning, PCL-Marco construction manager. “We are driven by the purpose of building a better future together and we are proud to show our local love to the communities in which we live, work and play.”

Set to enhance healthcare services in Newfoundland and Labrador with sustainable features and advanced technologies, Corner Brook Acute Care Hospital was designed to be an important civic landmark.  PCL Construction and Marco Group are joint venture partners, as part of the Corner Brook Health Partnership team chosen by the Western Regional Health Authority and the Government of Newfoundland and Labrador to design, build, finance and maintain the seven-storey, 600,000 square-foot hospital and cancer centre. The project, designed to Leadership in Energy and Environmental Design (LEED®) v4 Silver standards, focuses on functional design that will have a positive, long-term effect on its occupants as well as the environment.

The project is targeted to achieve substantial completion late Fall 2023. This important milestone, signifying construction completion, is when the Corner Brook Health Partnership team will hand the keys over to Western Health for a transitional period that will enable them to train and orient staff prior to opening to provide patient care in 2024, at a date to be confirmed in the near future.