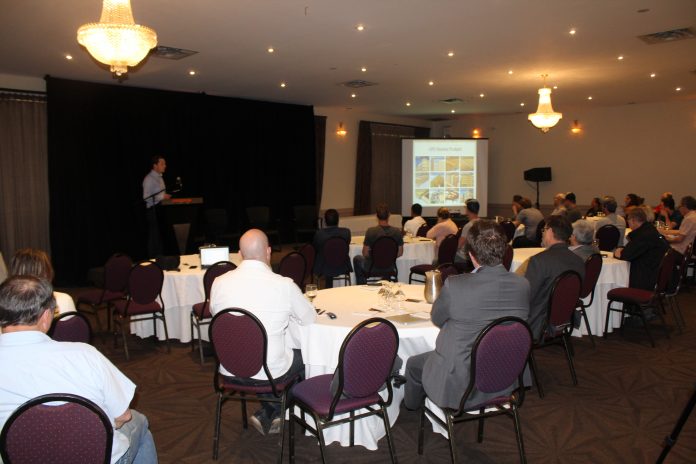 How can builders design their projects for resiliency in an environment of significant climate change?

Several speakers at the annual Greater Ottawa Home Builders’ Association (GOHBA) Building Innovation Trade Show on May 22 addressed the issue – describing sobering challenges, while suggesting practical solutions that can be incorporated into building design and construction at relatively low cost.

Canada’s temperature is an average of 1.7 degrees Celsius higher than it was in 1948 – and in the north and prairies, it has increased by more than 2.3 degree Celsius, GOHBA Innovation Committee chair Serge Desjardins, from Minto Communities, said in his introductory remarks.

“Ottawa has joined the ranks of other municipalities and has declared a climate emergency” and the indications of the problem are clear – recent tornados, and major Ottawa River floods in 2017 and this spring.

“As we speak, the Ottawa River is finally receding – and hundreds of people affected by the floods are faced with the decision of whether they should rebuild or leave their homes,” Desjardins said.

How can these problems be addressed?

Natalie Armstrong from Enbridge Gas, in introducing Enbridge Renewable Natural Gas (RNG) expert Tim Short, said that “energy efficiency is the foundation of resilience – as the most affordable energy is the energy you don’t use.” Enbridge was one of the event’s main sponsors.

Short explained that Enbridge is working on a voluntary RNG program, as well as initiatives with hybrid heating a power-to-gas projects.

He said RNG is biogas, often generated from waste. “The impurities are taken out of it to get pure methane.”

The challenge is that this RNG is about three to four times as expensive to produce with current technologies as conventional fuel. However, he says consumers may be ready to pay more for a blend of biogas with regular fuel.

Another initiative relates to hybrid heating concepts. In theory, by heating with electricity rather than gas, you could eliminate fossil fuel gas emissions – but the problem is that peak electrical demand is often fuelled by natural gas, and these plants are “at best 55 to 60 per cent efficient; more likely 30 to 40 per cent efficient.” Additional efficiency is lost in the transmission process, meaning that the efficiency of a baseboard heater might be as low as 30 per cent. “This is not an efficient way to heat our homes,” he said.

“During these times, why wouldn’t you have a very high efficiency gas boiler, with a high 80 or low 90 per cent efficiency – and greenhouse gases are lower.”

But in the shoulder seasons when things aren’t extremely hot or cold, Ontario has a surplus of hydroelectric and nuclear energy – at these times, maybe it makes sense to use electric heat.

Enbridge is working with Ryerson University, the City of Markham and EnerCan on a project to have 10 homes designed with the hybrid system.

This project takes excess emissions-free electricity to electrolyse water to produce Hydrogen gas which can be stored, and when needed at peak times, injected into the distribution network to displace natural gas.

Gary Martin, a professor with the Sprott School of Business at Carleton University, described resilience as “toughness – preparing for severe weather, and then (having) the ability to recover and return to full functionality afterwards.”

The consequence for buildings include lessened demand for winter heating and more cooling in summer, faster deterioration of cladding and expansion joints, more water infiltration and mould and damage from drought and wildfires.

Consequences for builders include: damage to materials stored outside and houses under construction, risks to workers, insurance costs, weather delays, interruption of material supplies, and on a more positive note) longer shoulder seasons, meaning more production.

Everything is interconnected, Martin indicated. For example, the major storm and flooding in the Houston, TX area pushed up the price of plywood in Canada. Rising energy costs are starting to create in some situations “energy poverty”. On the other side, younger people are less interested in owning cars – and they don’t need parking spaces, freeing up land. And there could be impacts on global migration as people seek to flee to Canada’s relatively mild climate.

Dan Sandink, director of research for the Institute of Catastrophic Loss Reduction (ILCR) described how the insurance industry has funded research into the problems associated with climate change.

He said in the past decade, there have been an average of 10 catastrophes a year. (Catastrophe is defined as an event causing an insurance loss of $25 million or more.) Problems include extreme rain/floods, high winds and also wild-land fires (namely the major Fort McMurray disaster).

Sandink said most of the losses and claims arise from homes and personal property, rather than industrial and institutional damage. Basement flooding has become a serious issue, caused by a variety of events including sewer backups, major storms, and infiltration of flooding groundwater percolating next to the foundation.

Tornados and high winds are also problematic, he said.