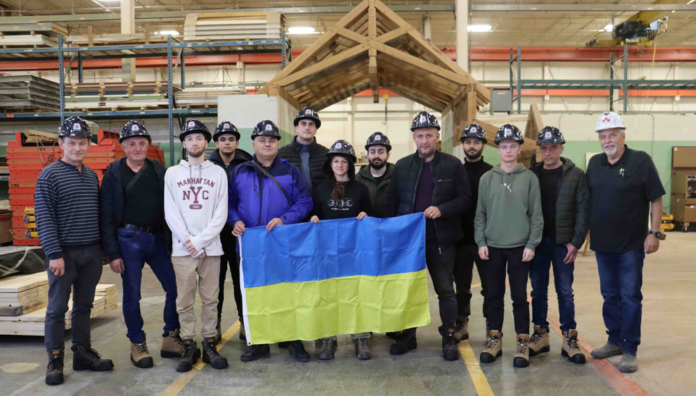 By Michael Lewis
Special to Canadian Design and Construction Report

They’re from profoundly diverse backgrounds – merchants, teachers, concert
violinists. Some have harrowing tales of their journey to Canada and most would have never dreamt they’d find themselves working on a construction site  in Toronto
in December.

But that’s the reality for Antonina Bazhan and scores of other Ukrainian refugees who’ve received training and job placements in the GTA through a joint initiative of the United Brotherhood of Carpenters Local 27 in Toronto and the College of Carpenters and Allied Trades.

“I think they’re very happy to be in Canada given the alternatives,” said Mark Lewis, general counsel for the 9,000-member Toronto area union local. “Construction Is hard physical work and it’s not for everyone but Toronto is safe and there is work for them.”

The program, involving voluntary contributions and funded entirely by the union, began to take shape midsummer after Carpenters Union members pointed to a need in the aftermath of the Russian invasion of Ukraine early this year. College of carpenters instructor Frank Slywka said the aim is to give the refugees a softer landing
in Canada than might have otherwise been the case.

He began the outreach effort by visiting immigration hotels near Pearson International Airport as well as immigration and citizen offices to recruit trainees on days when refugee claimants can receive temporary social insurance numbers to allow them to work.

Bazhan said she met the union representative “just by chance” at an immigration office on a Thursday and began her training the following week. Slywka continues to meet with groups of Ukrainians to distribute information pamphlets and gauge interest in construction work, visiting immigration centres during the week and dropping by hotels often on weekends.

He might ask about language proficiency, any building trades experience and explain what the union has to offer. Those interested are invited back to the local union hall in Woodbridge to pursue the industry’s mandatory occupational health and safety training. 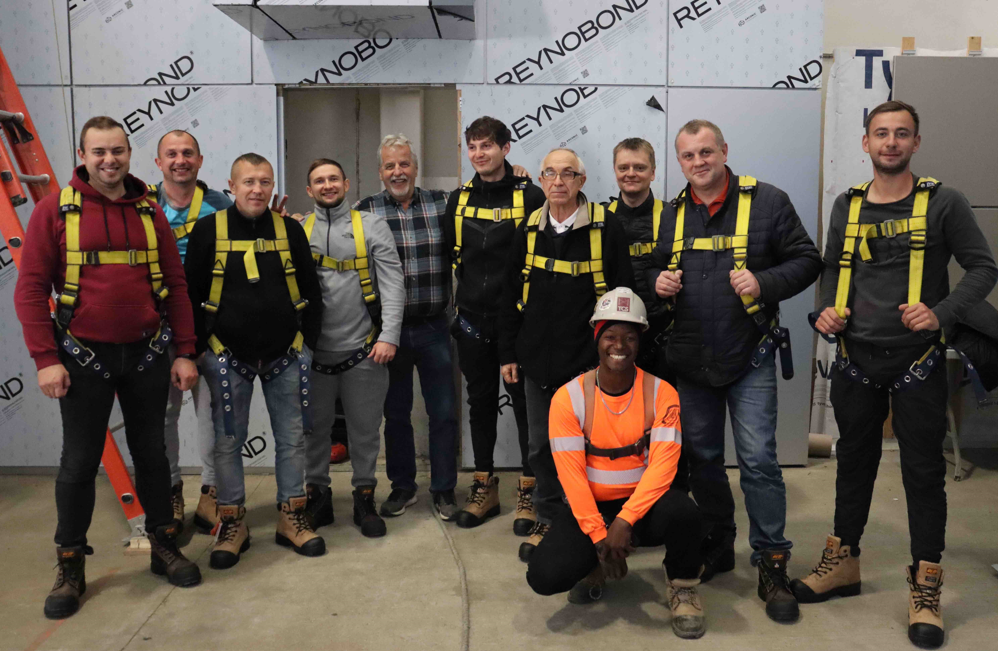 Some are scared, he said, with few possessions, unsure of what to do.

“Frank rose to the occasion and then it was really word of mouth,” said Carpenters District Council of Ontario innovation director Mike Yorke, adding those interested are provided with two to three days of nine-hour day classroom training to achieve occupational health and safety certification needed to enroll in apprenticeships and work on construction sites.

Classes of 12 students are graduating weekly with training, hard hats and work boots provided through a union fund and Yorke said more than 80 per cent of those
who have gone through the training are working in construction in areas such as
siding and flooring or in other sectors. Whether the individual has extensive experience in construction or none at all he noted that everyone working in the building trades in Ontario must achieve health and safety training certification.

Slywka, who is bilingual in English and Ukrainian, is conducting training classes in both languages and offers more specialized training so that the trainees can be licensed to operate elevated platforms such as scissor lifts and articulating booms for drywall application and other work. He said an effort is made to group trainees together with an English speaker while Lewis noted that foremen on some job sites speak Ukrainian and or Russian.

According to Lewis the program has led to more than 80 Ukrainians being placed with construction contractors in the area including Bazhan, a professional violinist in her
native Ukraine who finished at the top of her class in health and safety
training.

She started this month as a concrete former with PCL Construction at the Sick Children’s Hospital’s campus redevelopment site in downtown Toronto.

Bazhan arrived with her family in Toronto in September after fleeing air attacks in May in western Ukraine and taking a bus to Germany. They have secured an apartment here after staying at a hotel and are grateful for the help, the residency — and the work permit. Bazhan said she is relying heavily on the English she studied in school in Ukraine but making the transition has been hard.

“Of course I’d like to return to playing the violin as I’ve been doing all of my life, but I needed a job.”

The majority of the trainees are men, but women are undergoing training as well and have also been assisted by the local in finding work at area factories and retail
business, Lewis noted, including a catering service that leases space at the union hall.

Employment makes it far easier for the refugees to provide for themselves and their families, to send money back to Ukraine and elsewhere where they have family members and friends and to assist with the war effort.

Their employment also adds union members and it goes a part way to addressing the acute shortage of skilled labour facing the construction industry. (BuildForce estimates that Ontario will need to recruit more than 70,000 workers over the next six years
to meet the demand for labour to build housing and infrastructure.)

Union leaders are hopeful that the situation in Ukraine might stabilize soon but Slywka said they are also looking at ways of duplicating and expanding the program perhaps to
other cities such as Winnipeg where many Ukrainian refugees are also in need of work.
According to Nadia Gereliouk, executive director of the League of Ukrainian Canadians, some 30,000 individuals fleeing the Ukrainian conflict have arrived in Ontario since September with the majority settling in the GTA.

She said the carpenters’ training for refugees assists her group’s effort to find accommodation for the new arrivals, since they can provide a potential landlord with assurance of reputable employment.

”It’s not a hand out for sure,” she said, adding that the refugees as a group are highly motivated and dedicated employees.

“They’re amazing workers,” added Zenon Radewych, a principal at WZMH Architects in Toronto which recently hired seven architects and support staff displaced by the war in
Ukraine and is providing additional contract work to Ukrainians here and abroad where it can.

“It’s a mutually beneficial arrangement,” he said. “They are contributing and working very hard.”

Lewis added that contractors have stepped up and made employment available to refugees, noting as well that refugees and immigrants in general have been major contributors to construction in Ontario for decades.

“This is a way of giving back,” he said, adding that the union will be holding a Christmas party for about 350 of the new arrivals, their families and other members just before the Ukrainian Orthodox celebration in early January.

“We’ll serve them some Ukrainian food, wish them a Merry Christmas and let them know that Canada cares.”