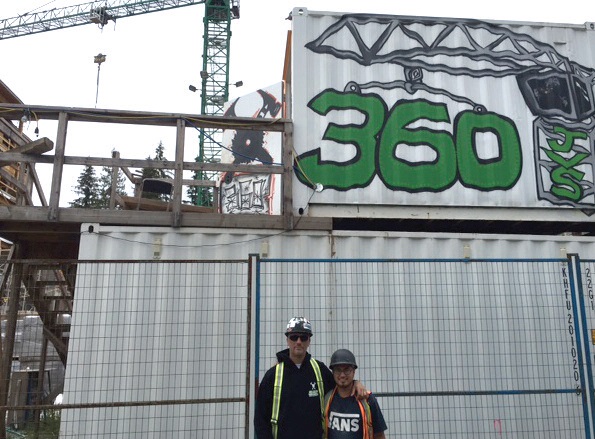 Now in its tenth year in business, Surrey, B.C. based 360 Crane Services and Maintenance offers a wide range of services including truck rentals, recycling, towing, snowplowing and construction services. The company recently made headlines when it reached out with an offer of employment to two homeless men.

Various news agencies reported that two men had been offered work and given one-way bus tickets to B.C. after one was denied funding to continue staying at a shelter in North Battleford, SK. CBC had quoted 360 Crane’s owner Jason Stennes at the time as saying: “I’m one of those guys that if I’m at a red light and there’s somebody begging for change and he’s 20 years old, I offer him a job. I give people a chance. It’s just what I do.”

While one of the men was not able to remain at work in the field due to health issues, the other used the offer as a stepping stone to get back on his feet, becoming one of the almost 80 people The 360 Group employs, before moving on to new employment.

Dan Norman, 360 Crane’s vice president and general manager, says just as Stennes (also known as Stretch) applies a common sense approach to life and dealing with people, he also applies that same common sense to business. He says he had a dream to expand where viable demand existed and has grown the company, division by division, according to that. “The recycling divisions are the future for our planet and are growing steadily each and every year. Location, demand and ease of use has driven 360 Recycling and 360 Bumpers and Plastics on a steadily increasing profit margin.”

He says the company’s trucking division was a perfect compliment to its light/medium weight material hauling and vehicle towing. The company is able to use its own trucks for a majority of its interdivisional hauling and towing. 360 Crane Truck Rental and 360 Towing, he says, is ready at a moment’s notice.

The company’s snow removal division was purchased as a complete turnkey operation to meet the needs of small shops, strip malls, and parking lots. “Two plow trucks with large capacity salting hoppers handle the large areas while a team of two quads with blades handle the areas where the big trucks can’t get to. Driven to keep businesses open and the public safe is 360 Snow Plow Service’s main goal.”

Norman says 360 Cranes and Maintenance has supplied manpower for tower crane set up and demobilization for eight years. “Coming from rigging and operating tower cranes in the Vancouver area for 17 years, Stretch found a demand to supply operators and riggers for the construction industry, not only in B.C., but also into Alberta.”

He says skilled personnel are hand picked by Stretch himself, to get the job done in one of the industry’s most skill-oriented jobs.

“We work hand in hand with Worksafe BC to keep our crane division on the leading edge of safety and reliability to give the client peace of mind that things will run smoothly in crane operations.”

While this is the tenth year for the company overall, it is also the first anniversary of the company’s 360 Construction division. “Even though The 360 Group has supplied carpenters for three years to other large companies in the Lower Mainland, we have now been our own construction company for one year.”

Norman says 360 Construction has grown to be a contender in the concrete forming industry. During its first year the company constructed a 14-storey tower and a 244,000 sq. ft. parkade. “At present we are completing a project that was abandoned by another form work company and started a small four level commercial/office project near Granville Island.”

He says more work is on the horizon, for this and all of The 360 Group’s divisions, as the market is booming in the Vancouver area.