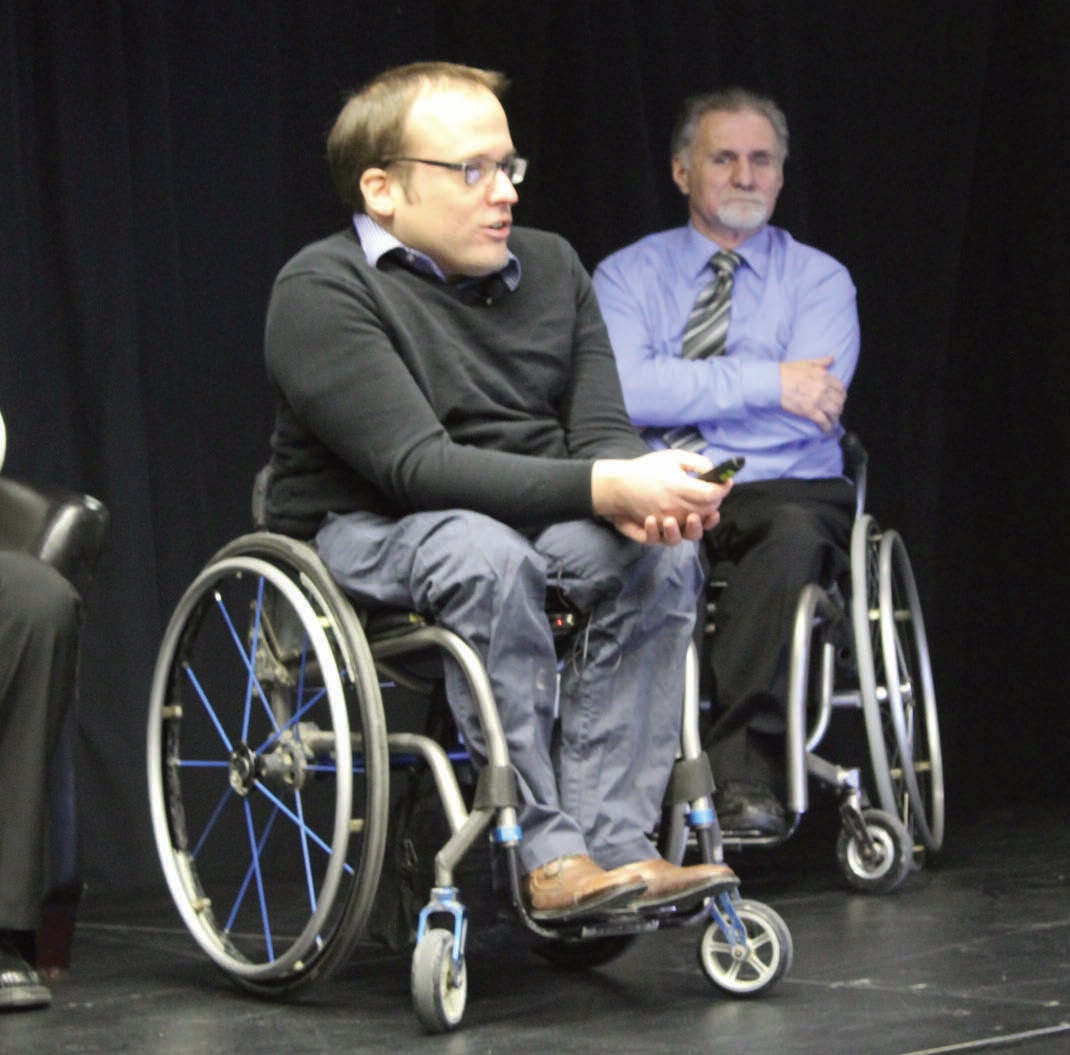 Several speakers at a panel discussion AccessAbility: Social Integration by Design at Carleton University in Ottawa say, indeed, progress is being made, but there are gaps, failures and inconsistencies in the results.

There are challenges in changing building codes and provincial accessibility legislation guidelines, but there is evidence that accessible design does not need to be expensive and in fact can create significant market advantages for commercial developers.

“Our gathering this evening is exactly the right thing to do and this is the right time,” Zouari said. “Any time is the right time for taking steps in approaching disability differently; approaching it far more inclusively, with a more respectful recognition of the value and the fragility of life. We are all at risk. No one is immune.”

Speaker Allen Mankewich, from the Canadian Centre on Disability Studies (CCDS) based in Winnipeg, described results from the CCDS VisitAbility Project – an entry level approach to developing accessible housing at reasonable cost.

The project developed designs for a Winnipeg subdivision with a “no-step entrance,” with provisions for a ground floor accessible washroom and barrier free design inside. The project developed 1,200 single family “visitable homes” – and the neighbourhood became the fastest selling Winnipeg community. “Visitable housing is marketable,” he said. “Most stakeholders were very positive. Building professionals’ perceptions changed from being skeptical to positive.”

Accessibility consultant Amy Pothier says the Ontario Building Code has higher standards than Canada’s National Building Code – the standards here aren’t as low as they are nationally, and there have been improvements in recent amendments, but they “don’t go far enough.”

She said many seemingly little details have significance, such as door widths and “latch side clearances” (the clear floor space adjacent to doors).

A proposed “built environment” accessibility standard to ensure compliance with AODA submitted to the provincial government in 2010 “didn’t make it past the proposed document” – because there wasn’t research to back up the accessibility requirements assertions, she said. But some good came out of this failure: Significant research was commissioned, including the building opening dimensions required “for wheeled mobility devices in North America – it is fantastic to provide insights into the clear floor space requirements and turning circles.”

Recent building code changes are improving the story, including the requirement for elevators in buildings threestoreys or higher, depending on the use or area in the building. As well, door widths have increased from 860 to 915 cm – the seemingly tiny difference has had significant impact. “We’re changing the way we specify and look at and design doors.”

The last “big ticket item, the universal washroom, has undergone tremendous and intense changes” with enough room to allow for proper “turning circles” for mobility devices.

Roger Gervais, who specializes in both visitable housing and aging in place, explained one of the most important aspects of aging in place – the growing need for barrier free design in dwellings. “Homes are safer, more inclusive and more sustainable when architectural barriers are removed, and it’s far more economical when done in the design of a new home,” his presentation synopsis said.

He said there is a need to go beyond the myths that accessible design “is ugly and is going to bring down my home’s value if I need to sell it.”

Falls are a big problem. “In 2012, fire officials reported 314 deaths, and there were 10,000 emergency
room visits resulting in $476 million spent on health care because of residential stair falls.

Steven Titus, president and CEO of Aercoustics Engineers in Toronto, discussed how hearing impairment creates design and building challenges. There are issues with background sound levels, and sound isolation. He gave a demonstration of the challenges of managing the “signal to noise ratio.”

Currently one in seven people have disabilities; there are 3.8 million working age Canadians (13.7 per cent of the
population) with mobility challenges; and 1.3 billion people worldwide – or 2.4 billion directly related or involved with people with disabilities. And, as Amy Pothier reported, the numbers will increase substantially in the next decade as the population ages.