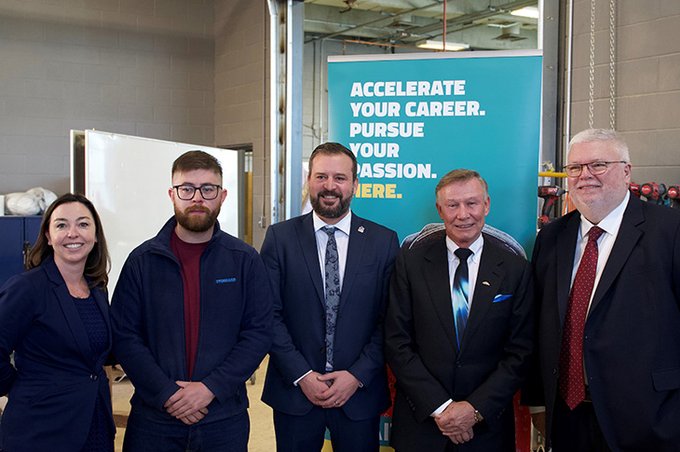 Construction industry leaders in Alberta are tackling a labour shortage with millions of dollars for scholarships to get more people into skilled trades careers.

Heads of SAIT, home builder Jayman Built and industry association BILD Alberta made the announcement of a scholarship fund of more than $7 million to help 1,400 students pursue training in construction on Tuesday.

Jay Westman, chief executive officer of Jayman Built, said the scholarships are to help shore up job vacancy rates that have been climbing “at an alarming rate” since the turn of the century, “making this the single biggest and most challenging problem the industry has ever faced.”

“The shortage of skilled labour is the largest single issue our industry has ever faced, extending build times for new homes and putting at risk home affordability in our province,” Westman said.  “I have chosen to lead by example and lead this investment campaign to make a notable impact in overcoming the financial concerns of students, while also bolstering our industry’s much-needed construction capacity across Alberta.

“This is an Alberta initiative with an Alberta solution.”Homebuilders in Alberta are facing one of the largest construction challenges they have ever experienced, putting home affordability at risk in Alberta. As a result, the scholarship campaign was created to address the current and future need for skilled tradespeople to improve the industry’s capacity to build homes.”

Westman donated $2 million and challenged industry peers and community leaders to match funds raised to establish the BILD Alberta Scholarships for Construction Careers initiative. Results surpassed the initial $3 million goal with donations from the homebuilding community, with more than $7 million committed. Westman announced he will chair a major investment campaign to reach his goal of $15 million.

The initiative could fund about 3,000 awards for SAIT and NAIT homebuilding apprenticeship and pre-employment students with preference given to demographics underrepresented in the industry.

Scholarships will cover the full range of residential construction careers, including carpentry, plumbing, sheet metal, electrician, bricklayer, cabinet maker, roofer, drywall, glazier, insulator and painter, for example, and will help workers on a pathway to their journeyperson certifications.

A portion of the funds will also be used to reach high school students and enhance skilled trades development across the province by building awareness of rewarding careers in the skilled trades.

“Careers in skilled trades provide important contributions to our communities and Alberta’s growing economy,” said Dr. David Ross, SAIT President and CEO. “We are thankful to once again see the homebuilding industry come together to elevate trade programs and support student success.

“SAIT students will have access to a scholarship program focused on building equity in the construction trades, and programming to engage with youth will foster an early interest in skilled trades. We would like to acknowledge Jay Westman for championing this initiative to support education in the trades and celebrate the success of students working in industry.”