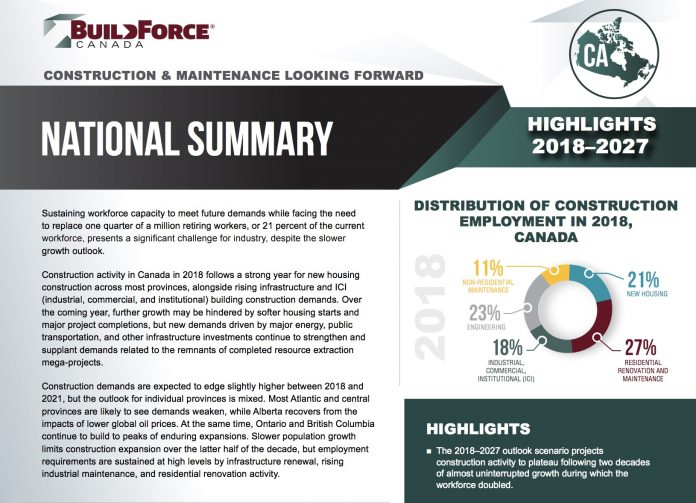 Canada’s construction industry must remain focused on recruitment and retention as more than one quarter of a million construction workers are expected to retire this decade, according to the latest labour market forecast released today by BuildForce Canada.

While slow and uneven construction job growth is anticipated this decade as construction activity levels off, the notable provincial exceptions are BC’s Lower Mainland and Ontario’s Central and Eastern regions, where rising project demands have outpaced the available local workforce.

“Despite slower employment growth in most provinces, recruitment pressures will intensify with the estimated retirement of up to 21 percent of Canada’s construction workforce this decade,” BuildForce executive director Bill Ferreira said in a statement.“Simply put, the industry must remain focused on recruitment, training, and mentoring efforts to prevent a potential skills and capacity gap over the next 10 years.”

BuildForce Canada’s 2018–2027 Construction and Maintenance Looking Forward forecast shows construction activity is expected to soften in most provincial markets due to the aging population and weaker demand for Canadian natural resources.

Despite this trend, the workforce is estimated to rise by approximately 22,000 workers by the end of the decade, as modest gains in non-residential job growth outpace small declines in residential construction. Public infrastructure modernization and growing demand for residential renovation and heavy industrial maintenance activity should help sustain industry employment over the decade.

Major transportation, utility, and other infrastructure projects are expected to nudge non-residential employment up a further 3 percent, or 18,400 workers to a near-term peak in 2020. That growth is concentrated in Ontario and British Columbia, driven by major nuclear refurbishment, LNG (liquefied natural gas), energy, and transportation infrastructure projects. Steady job growth related to anticipated increases in demand for commercial and institutional building construction will prevail in most provinces. While slower population growth may lead to lower demand for new housing construction, any declines should be offset mainly by rising renovation and maintenance activity.

“To meet labour requirements and counter rising retirements, as many as 277,000 new construction workers will be needed this decade,” said Ferreira. “With increasing competition for a shrinking pool of young people, it will be necessary to step up recruitment efforts to attract greater numbers of new Canadians, women, and Indigenous people to Canada’s construction workforce.”