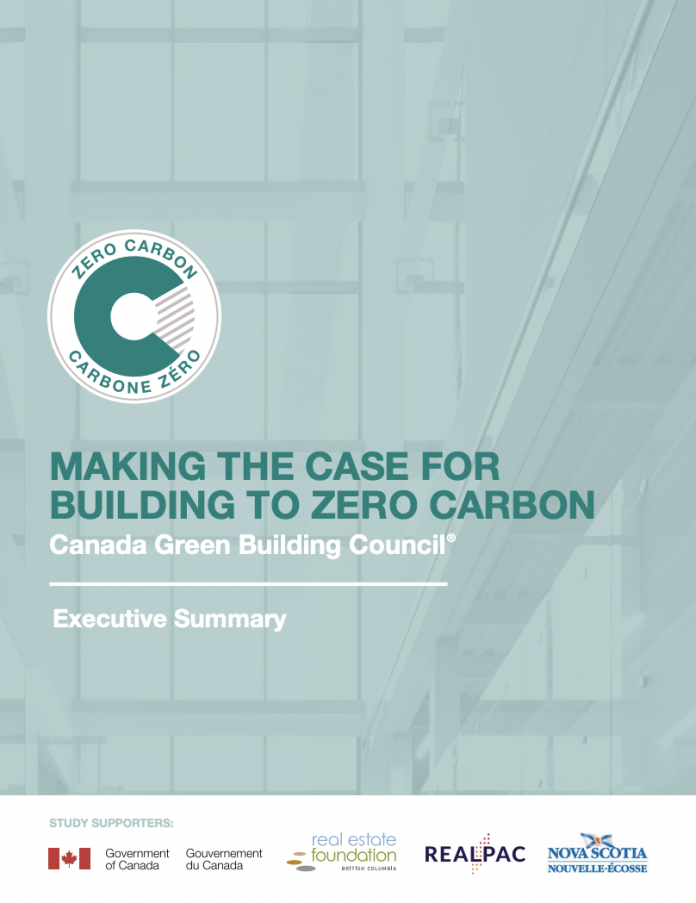 Entitled “Making The Case For Building To Zero Carbon,” the CaGBC report confirms that Zero Carbon Buildings are financially viable today, with a positive financial return over a 25-year life-cycle, inclusive of carbon pollution pricing, and requiring only a modest capital cost premium. The economic case for Zero Carbon Buildings is reinforced over time with the rising cost of carbon, increased resiliency, and by avoiding costs such as future retrofits.

Eliminating pollution from buildings is important if Canada is to meet its climate action goal
of reducing greenhouse gas emissions by 30 per cent below 2005 levels by 2030. The CaGBC report found that, by 2030, over four million tonnes of carbon dioxide equivalent emissions per year can be avoided cost-effectively if the seven building types studied are built to be Zero Carbon Buildings. This represents more than 22 per cent of the 20 million tonnes of greenhouse gas reductions that the Pan-Canadian Framework recognizes as potential savings from the building sector.

These emission reductions can be accomplished with a total incremental capital cost of $3.3
billion per year, which would fund the construction of approximately 47,500 new
residential units and 4,800 new commercial/institutional Zero Carbon Buildings annually.

“The cost of not adopting Zero Carbon Buildings grows with each passing day,” says CAGBC president and CEO Thomas Mueller. “This study shows us definitively that Zero Carbon Buildings can be achieved with existing market-ready technologies and approaches for most building types, and that operating cost savings will cover the needed investments,”

“The Canadian building industry and governments now have proof to make the changes needed to create Canada’s low carbon building stock and avoid creating buildings that will become a liability in a carbon constrained economy.”

“This study shows that Zero Carbon Buildings provide tangible benefits to owner-operators,
design teams and policy decision makers,” says Antoni Paleshi, senior energy performance specialist (sustainability and energy), WSP in Canada, who co-authored the study. “There is an opportunity for building owner-operators, design teams and governments to demonstrate leadership in normalizing the processes and technologies that will make Zero Carbon Buildings the go to industry standard for building excellence.”

The development and publication of this study was made possible through financial
contributions from Natural Resources Canada, The National Research Council, Public
Services and Procurement Canada, The Treasury Board of Canada Secretariat, REALPAC, the Government of Nova Scotia and the Real Estate Foundation of British Columbia.