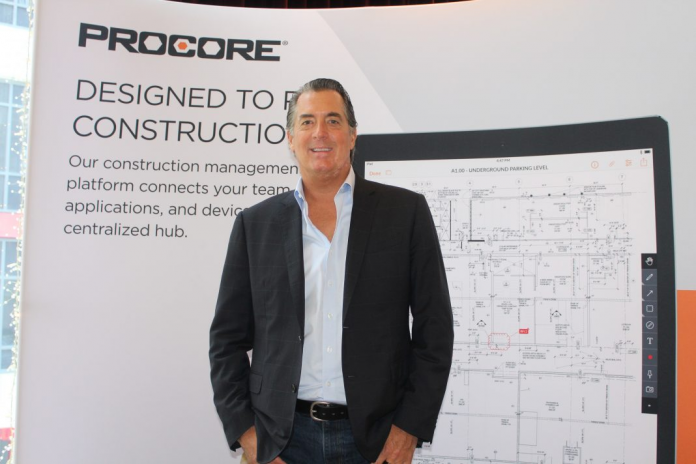 Procore, which provides cloud-based construction management software, has grown rapidly since it arrived in Canada about three years ago. The business now has over 40 Canadian employees, with two offices, in Vancouver and Toronto (30 work in Toronto), and manages “hundreds of billions of dollars in turnover,” says Jas Saraw, the company’s vice-president, Canada.

Procore  CEO and founder Tooey Courtemanche recently visited Toronto as part of a panel discussion sponsored by the Ontario General Contractor’s Association (OGCA) and Procore about spearheading change in construction leadership. In an interview with Ontario Construction News, Courtemanche offered some observations about trends and changes in the industry.

“We’re still in the early days of analogue to digital transition in the industry,” Courtemanche said. “What we’re seeing is that after 2010, with the iPad becoming available, there is more and more adoption in the field. What you are getting is a tremendous amount of data – with challenges for data accumulation and structuring the data.

“Because we are an open platform, with 130-plus partners which build on the platform as well, all of the systems are gathered into a single source. And that means we’re moving more towards the next phase, making better decisions, making things more on schedule, on budget, and safer, with efficiency gains.

“My belief is we are still in the early to mid adopter stage, both in the segment and globally.”

Construction has 13 per cent of the global economy, seven per cent of its workforce, and annually generates $11 trillion dollars in activity — “we are all at the early stages.”

Upwards of 50 per cent of contractors and subtrades are using Microsoft Office, “not specific to managing construction.” For a large percentage of the industry, technology is seen as email, spreadsheets and documents – and there is a huge untapped market for the comprehensive cloud-based software that Procore delivers.

Courtemanche said Procore focuses on the construction segment, leaving the earlier-stage design functions to other providers such as Autodesk. “From our vantage point, we’re never going to be an authoring tool.”

However, Procore can take a set of Revit files, operationalize them, and use Procore’s tools to develop the actual project and work plan. There’s also much room for collaboration between builders and designers – and the opportunity to avoid errors and inefficiencies including constructability.

“There’s a place for design co-ordination, with clash detection systems, assigning responsibilities for parties, bringing the construction work closer and closer to the BIM model and all the way through close-out,” he said.

In a broader sense, “my hope is to get to the place when we have the vision to elevate everyone’s life in construction and change the paradigm about how construction is delivered,” he said.

Courtemanche said he believes Procore can facilitate collaboration, getting away from the business model of “my win is at your expense.”

“What we’re trying to do is create a single source of truth, so you can efficiently run and move the project along at the fastest rate, removing all of these areas of opacity.”

In the traditional model, there’s very little transparency “down to the general contractors and suppliers.” It would be far better to collaborate and for everyone to be better involved in the project to determine the most efficient way to deliver the construction process, he said.

“The good news is we have more than 7,000 customers, and a growing percentage of these are owners,” Courtemanche said. “Can we make it so that everyone talks to each other, my system talks to your system at Procore?”

Courtemanche says Procore has designed its access and pricing models to ensure the software is economical at all stages of the construction process, and for contractors and subtrades of various sizes.

For example, a general contractor using the system can grant access to subtrades and suppliers on its projects, without the subtrades needing to purchase their own Procore license. Procore doesn’t sell “seat licenses,” meaning that everyone in the subscribing organization can access the system as needed.

“There’s an unlimited user model,” said Saraw. “All relevant parties on any job can access unlimited data. There’s no friction around any party at a job site, with the ability to upload data.”

These policies ensure that “all collaborators are able to deliver a truly collaborative experience.”

While Procore currently provides services in more than 100 countries worldwide, Courtemanche considers Canada to be one of the company’s most important markets.

“I would like the Canadian market to understand we are here to stay,” he said. “We are going in and pushing in all of our chips in to create a generational company.  We went from starting three years ago to having 45 employees today, and we’re just getting started.

“We are here. We are committed and we will be the best partner in providing solutions to the industry and that’s our commitment to the market,” Courtemanche said.