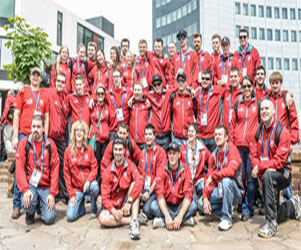 Michael Schneidman from Grand Prairie, Alberta received a gold medal in the refrigeration and air conditioning category, and won the ‘best of nation’ award.

Thirty-five Canadians, ranging in age from 17 to 22, participated in the competition.

“We are exceptionally proud of their outstanding performance and look forward to seeing their careers flourish,” said Shaun Thorson, chief executive officer, Skills/Compétences Canada. “We are also grateful to our sponsors and partners for their ongoing support which is integral in building Canada’s skilled trade workforce.’

WorldSkills Leipzig 2013 represents Canada’s twelfth participation in a WorldSkills competition, a biannual international event which brings together the world’s most talented skilled trades and technology competitors. This year’s competition brought together more than 1,000 competitors from 53 member countries/regions, making it the largest ever competition of its kind. Team Canada 2013 represented one of the largest delegations Canada has ever sent to WorldSkills, with competitors in 32 of the 46 skills categories.

These participants received medallions of excellence for construction trades