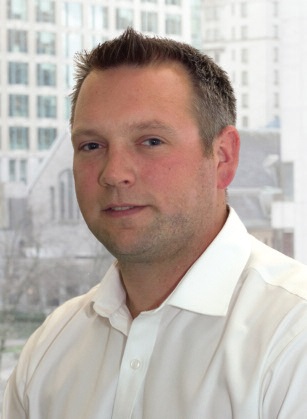 As the construction industry’s senior managers retire, there are new opportunities for younger people. Chris Lyons, a 38-year-old senior construction manager, has taken on increasingly challenging responsibilities, including association leadership as chair of the Vancouver Island Construction Association’s (VICA) U40 (under 40) group.

Lyons studied engineering in university and then progressed through the roles of project co-ordinator, then project manager. Three years ago he started with Omicron, attracted by the company’s development, design and construction diversity, and moved into the role of senior construction manager.

“It used to be that people worked into project management through the trades,” he says. “Now though the training is available to allow people to transition sooner and with large portions of senior management retiring, there are many people my age stepping into these roles.”

He says this has created challenges for both generations as older superintendents realize the old ways of working and dealing with people may no longer be appropriate. Younger generations, he says, must also adapt their thinking as well in accepting that some things won’t change as quickly.

Lyons says it is important for young people in the field to learn as much as they can from the projects that challenge them the most. For him, that was Poet’s Cove Resort & Spa on Pender Island. This complex island build included a hotel, marina, cottage properties and a lot of earth work. It also came at a time when work was booming on the mainland and getting people to work on an island for a week at a time, a challenge.

Taking all that he has learned and all that he is still learning, he says his next logical step will be to become a project director. “This would involve managing the design, the owner and the construction of a project using all of my experience to work the various aspects and to bring everything together.”

In the meantime, Lyons is helping develop and grow VICA’s U40 group. He says there had been a similar group operating out of Vancouver for a while and when the idea to start one in Victoria was introduced, he got involved. Today the group includes a mailing list of about 150.

“We started the group primarily as a way for younger members to network, to have a voice, and to give back.”

He says it can be intimidating to speak out at general events, especially when you are surrounded by others with decades of experience, including your own supervisors and employers. The U40 group, he says, provides a more comfortable environment for socializing and for addressing the occasional concerns. “We have members who sit on the board and good ties to the board so we have an opportunity to bring those things forward.”

The group holds regular get togethers, with and without speakers. There are casino fundraisers and community initiatives. As part of VICA’s 100th anniversary, the group partnered with Esquimalt, who was also celebrating its 100th anniversary, to complete a $100,000 renovation, through donated time and materials, to Gorge Waterway Nature House in Esquimalt Gorge Park.

Recently as well, the group partnered with HeroWork and sent 40 volunteers and their families on a weekend project to complete a dock renovation for Camp Pringle, a United Church kids’ camp.

His advice to young people entering the field is to “come in with an open mind; find a mentor you can learn from whether they are five years ahead of you, or ten or twenty because they have experience you can learn from; and make sure you enjoy what you do.”