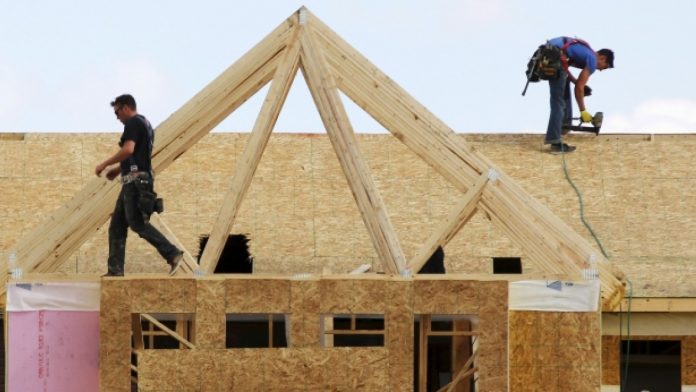 The Canada Mortgage and Housing Corporation (CMHC) has reported that the trend in Canadian housing starts reached the highest level in five years in June.

The trend in housing starts was 215,459 units in June 2017, compared to 214,570 units in May 2017, according to CMHC data.This trend measure is a six-month moving average of the monthly seasonally adjusted annual rates (SAAR) of housing starts.

“The trend in housing starts for Canada reached its highest level in almost five years,” CMHC chief economist Bob Dugan said in a statement. “So far this year, all regions are on pace to surpass construction levels from 2016 except for British Columbia, where starts have declined year-to-date after reaching near-record levels last summer.”

Prince Edwards Island’s housing starts continued to trend up during the month of June. Starts of single family homes have been particularly strong the first six months of this year, up 97 per cent compared the same period in 2016.

In June, housing starts trended higher in Quebec as a result of the construction of a large condominium project. However, in the conventional rental housing segment, year-to-date results show a 22 per cent decrease in housing starts compared to the same period in 2016. This decrease can be explained, in part, by the period of strong activity observed in this segment in 2015 and 2016 and the rise in the vacancy rate.

The total housing starts trend in the Toronto Census Metropolitan Area (CMA) remained virtually unchanged in June compared to the previous month. The pace of new home construction has been stable across all housing forms. A minor decline in the single-detached starts trend was offset by gains in the multi-family sector. Glancing further back, construction of ground-oriented homes, which includes single-detached, semis and town homes, have gained momentum throughout 2017, as housing starts so far this year have reached a five-year high. Limited resale supply in combination with strong home buying demand in Toronto have led more buyers to purchase pre-construction units.

Higher trending single-detached and row starts have pushed Barrie’s total housing starts up for the second month in June. Demand for new homes continued to fuel home starts in the town of Innisfil instead of the land-scarce city of Barrie. The town of Innisfil has become the prime location for the construction of low and medium-density homes in the Barrie CMA.

Oshawa had a record level of seasonally adjusted starts in June 2017, the pace of construction being nearly three times higher than the average seen over the past three years. While all housing types saw increases in June, the row and apartment segments were the clear leaders. Price weary buyers from the Toronto CMA continue to fuel demand for new homes in Oshawa.

Fort McMurray has experienced strong rebuilding activity after the wildfires last May. Since January, 785 housing starts have been recorded, twice as many as in the last two years combined. The majority of these new starts have been replacement single detached homes.

Housing starts trended higher in the Victoria CMA last month as new rental projects were initiated in Langford. Total starts for 2017 remain elevated but reduced from the record-setting pace last year. Multi-unit starts have been sluggish to date compared to singles, which are slightly above expectation. However, multi-unit construction remains elevated at 30 per cent above the five-year average. Developers will be keeping an eye on how the market responds to a higher completion rate going forward.

Vancouver CMA housing starts trended downwards in June, driven by a decrease in apartment starts. In the first six months of 2017, there were 880 ownership apartment starts in the City Vancouver, compared with 3,290 in the first half of 2016. Given the strong housing starts activity in the past year and the record number of units now under construction, it is not surprising to see starts trend downward according to industry capacity.

Rural starts were estimated at a seasonally adjusted annual rate of 17,922 units.