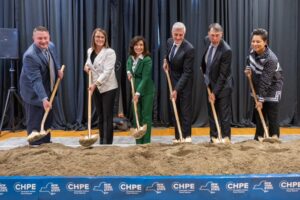 Construction has started on an underground electrical transmission line that will export Hydro-Québec electricity to New York City as part of an effort to make the Big Apple less reliant on fossil fuels, state officials announced Wednesday.

Construction of the green infrastructure project starts with a major union labor agreement between the Champlain Hudson and New York State Building and Construction Trades, is expected to create 1,400 union jobs during construction. The recent announcement accelerates progress to achieve New York’s Climate Leadership and Community Protection Act goal to obtain 70 percent of electricity statewide from renewable sources by 2030 on the path to a zero-emission grid.

“As construction begins on this project to help deliver clean energy to New York City, our state is setting yet another example of what climate action looks like,” New York Gov Kathy Hochul said in a statement. “The Champlain Hudson Power Express transmission line is a monumental step toward protecting our environment and creating family-sustaining, green jobs in both upstate and downstate New York.

“In partnership with union labor, this green infrastructure project will bring billions of dollars in economic benefits to our state and will pave the way for cleaner air and a healthier future for all New Yorkers.”

Champlain Hudson Power Express is the first of two historic projects to start construction under the State’s first-of-its-kind renewable energy and transmission program, known as Tier 4, that is administered by the New York State Energy Research and Development Authority. The program aims to responsibly deliver a significant increase of renewable energy to New York City.

The initial stage of construction activities, including site preparation and construction of a laydown yard, will begin in Washington County, near Whitehall, and is expected to continue through November 2024.

In October, the unions and the Champlain Hudson Power Express project team agreed to the first PLA, reflecting almost two million of those labor work hours with work expected to begin in late 2022. Among the trades participating in the 147 mile upstate underground portions of the project are Operating Engineers, Laborers and Teamsters.

Additional project labor agreements are expected to be signed in the coming months for the submarine portion of the transmission line, as well as the construction of Champlain Hudson Power Express’s converter station in Astoria, Queens.

“If New York is to maintain its leadership in green infrastructure, it is critical that we can continue to invest in development that not only spearheads these initiatives, but also creates good paying union jobs in the process,” President of The Building and Construction Trades Council of Greater New York Gary LaBarbera said. “Today’s groundbreaking represents the beginning of yet another infrastructure project that will act as a stimulus for New York’s economy and achievement of our clean energy goals.

“We look forward to working with CHPE and the State to provide skilled union tradesmen and tradeswomen who will effectively complete this project all while having the opportunity to pursue a middle-class career with benefits.”