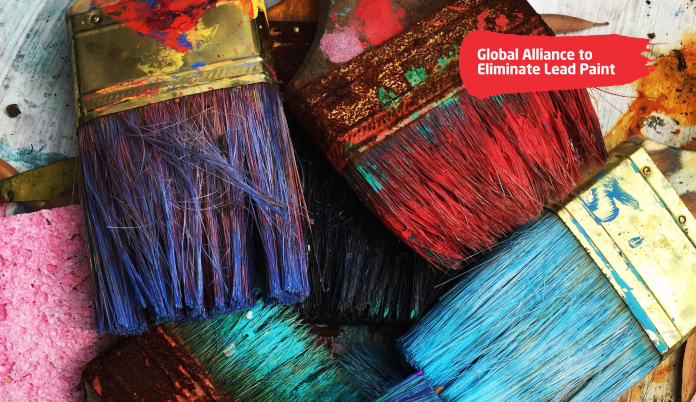 October 21-26 is the United Nations International Week of Action on Childhood Lead Poisoning Prevention. For most Canadians lead content in paint hasn’t been a cause of concern for more than 30 years because there have been regulations in place to ensure control of lead in paint products.

Health Canada is mandated, under the Government of Canada’s Hazardous Products Act and Regulations, to protect Canadians from potential health hazards in consumer products.

The following consumer products are specifically regulated for lead content under the Hazardous Products Act: paints, enamels and other liquid coating materials, decorative coatings on pencils and artists’ brushes, liquid coatings on children’s furniture and other articles intended for children, toys, equipment and other products for use by a child in learning or play, glazed ceramics and glassware, and kettles. Health Canada has also developed a Lead Risk Reduction Strategy for Consumer Products to protect children from exposure to lead through consumer products.

Canada has one of the strictest lead content limits in the world. In the 1990s Canadian Paint and Coatings Association (CPCA) members virtually eliminated lead content in consumer paint and stains sold in Canada through voluntary actions. In fact, when the Hazardous Products Act was enacted CPCA members were already in compliance with the 90mg/kg total lead limit. CPCA also partnered with the federal government in 1992 on a public education campaign on how to remove lead paint from older homes entitled “Old Paint, Lead and Your Family’s Health.”

Despite the forgoing, it is still a health issue in many other countries, especially for children and vulnerable populations. Product safety is a commitment that extends well beyond national borders, that is why the CPCA and its member companies are working globally with the United Nations Environmental Program (UNEP) and the World Health Organization (WHO) to eliminate lead content in architectural paint and coatings.

While industry and government successfully worked together to restrict the use of lead paint in Canada, the International Paint and Printing Ink Council (IPPIC), of which CPCA is a founding member, is seeking to accomplish similar results globally. A leading advocate for the global elimination of lead paint, IPPIC is a formal contributor to the UN Lead Paint Alliance (LPA, formerly the Global Alliance to Eliminate Lead Paint). Established in 2010 the initiative engages national governments, industry and non-governmental organizations to enact restrictions on lead use in paints that pose public health and environmental risks, especially to children.

Backgrounder about IPPIC’s support of the WHO International Lead Poisoning Prevention Week of Action.

UNEP reports that only one-third of countries around the globe control the use of lead in paint. In many countries, lead paint is still permitted in homes, schools, hospitals, on toys, and other children’s products. Lead poisoning is responsible for approximately 500,000 deaths and 9.3 million disabilities every year. The most common sources of lead poisoning include leaded gasoline, dust and flakes from lead in paint, and contaminated air, water, and soil. According to IPPIC’s Global Market Analysis, 95 per cent of the 20 billion litres of decorative paint produced annually does not contain lead. The remaining five per cent is produced in countries where lead content remains unregulated.

This year IPPIC is launching the UN Global Environment Facility project with the goal of establishing legislated lead paint restrictions in 40 countries by 2020. With a focus on Latin America, Africa, and Asia, LPA encourages countries without lead paint legislation to adopt the UN Model Law, which is designed to adapt easily to a country’s legal framework. IPPIC and its members like CPCA are working to raise awareness of the widespread need for legislated restrictions on lead content in paints and are committed to its global elimination through the Lead Paint Alliance.

Click here for a Backgrounder on IPPIC’s support of the WHO International Lead Poisoning Prevention Week of Action.