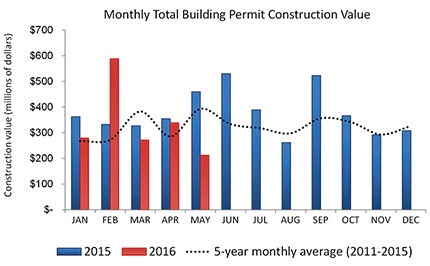 Data from the City of Edmonton shows how severely construction has contracted in Alberta’s capital city.

The city reported $213 million in total construction value for May 2016, a decline of 54 per cent from May 2015 and a 46 per cent decline from the five-year monthly average.

The year-to-date figures are less daunting, showing a total construction value of $1,689 million, representing an eight per cent decline from 2015 but a five per cent increase on the year-to-date average.