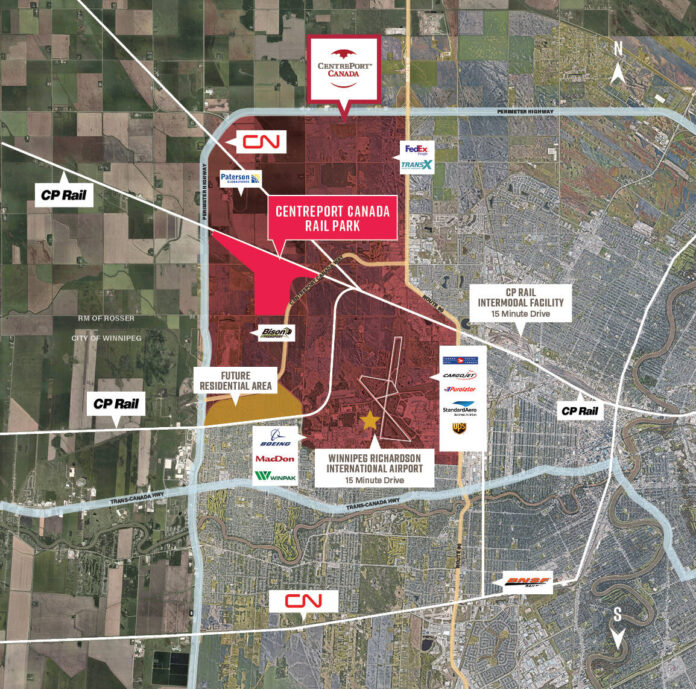 The rail park is expected to create about 5,000 jobs during construction, which will take 10 to 20 years.

A 20,000-acre inland port and foreign trade zone, CentrePort Canada is the largest trimodal inland port in North America with over 2,000 acres in active development. It’s the only inland port in Canada with direct access to trimodal transportation – truck, rail and air cargo.

“As we emerge from this pandemic, our government is focused on working with our economic development partners, industry and trade to unlock Manitoba’s true economic potential,” said Premier Heather Stefanson.

“This development, in the heart of the country, will support our vision to make Manitoba a true trade gateway nationally and internationally. Expected to create more than 4,800 direct and indirect jobs and have a significant impact on the province’s GDP, the rail park project will help us bolster our economy and attract new businesses, now and well into the future.”

“With global supply chain issues affecting the industry, there has never been greater demand in North America for a centralized logistics and shipping location for rail, truck and air than now,” said Ken Mariash, owner of Focus Equities Inc.

“We are already in negotiations with global brands who are interested in choosing our rail park land for their transportation infrastructure needs. Focus Equities is thrilled to be awarded the CentrePort Canada Rail Park project is honoured that the Province of Manitoba and CentrePort Canada Inc. has chosen our group.”

In 2018, CentrePort Canada Inc., with the support of the Manitoba government, issued a Request for Proposal to attract a private developer for the rail park project. Focus Equities Inc. was selected as the most experienced and qualified developer following that process.

The premier says the announcement builds on other investments made by government to support the expansion and growth of CentrePort Canada and to connect rail service with other forms of transportation including safety improvements to the Perimeter Highway.