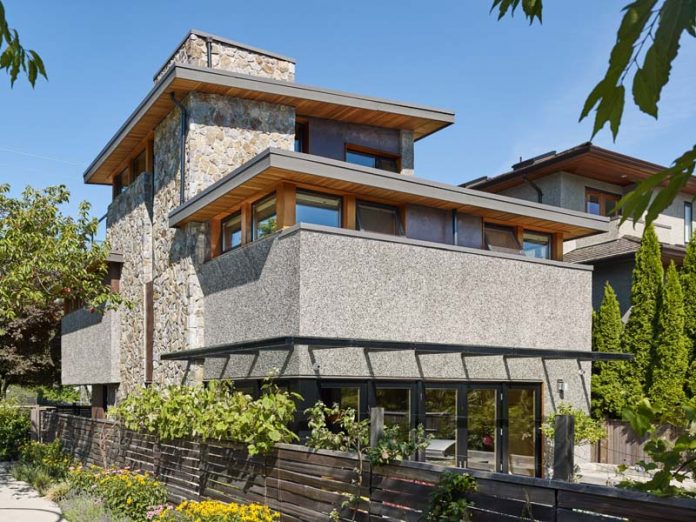 When the global financial crisis hit in 2008, business took a dive and residential designer Bryn Davidson began to rethink his approach.

Both an innovator and an early adopter, Davidson teamed up with contractor Mat Turner to launch a values-based design-build business in April 2009. With design quality and energy efficiency as core values, the team began carving out niches in the pre-fab, laneway and Passive House markets.

“We wanted to come up with a building system that could apply to every project,” says Davidson. “We wanted to go beyond the code on every single project.”

Located in Vancouver, a city with scarce land availability and high land costs, Lanefab initiated and led the movement to give laneway housing a try in the city.

Laneway houses are small secondary residences typically located at the rear of an existing home, and often replace an existing garage or parking area. They allow more people to live within the city’s limits, reducing the need for cars and lessening the pressure to expand suburban development.

Davidson championed the policy changes with city regulators to permit the creation of laneway homes, effectively creating his own niche. The company completed the City’s first laneway house in May 2010.

He went on to study architecture and sustainable development at the University of British Columbia, graduating at top of his class in 2004 and earning a Masters of Architecture degree and the RAIC Student Medal.

“Because of our name a lot of people think we only do laneway houses,” says Davidson.

The company builds about 10 houses per year, half of them are laneway houses and half are full-size. The firm employs 20 people, including designers and carpenters.

“Passive House is the finish line,” Davidson says of his original business plan.

Passive design strategies maximize the use of free, ambient sources of energy to light, heat, cool, and ventilate building spaces, reducing the need for “active” mechanical systems that use energy and cost money to heat, cool, and circulate air.

The primary return on investment in a Passive House is the reduction of operating costs and greenhouse gas emissions.

“Passive houses need 90 per cent less energy for heating than a regular home,” says Davidson. “You can be cash flow neutral from day one. The costs add a little bit to the mortgage, but there is less to pay on utilities.”

In addition to consuming less energy, Passive Houses are more comfortable and quieter than conventional homes.

The Passive House (Passivhaus) standard originated in Germany; where the first Passive Houses were built in the 1990’s. According to the International Passive House Association, there are around 30,000 Passive House buildings in Europe, of which some 1,600 are certified.

Lanefab has been building Passive Houses for the past four years, and only recently began seeking certification.

Municipal cash incentives make a big difference says Davidson. It costs about $10,000 for very detailed energy modeling, documenting the construction process and working with a consultant to achieve a Certified Passive House, he says.

“We probably wouldn’t certify without those incentives.”

Passive House (Passivhaus) is considered to be the most rigorous voluntary energy-based standard in the design and construction industry today.

“You have to be very meticulous during design and construction,” says Davidson.

Passive Houses have an extremely high level of air tightness. There is no thermal bridging. Ventilation is provided by a super-efficient heat recovery ventilation unit (HRV) which runs continuously.

“With a passive house there is no leakage,” says Davidson.

The cost premium is approximately 5-10%, with most of the upgrade cost going to the window and door package. Walls in Passive Houses are 17” thick.

“We are using lots of insulation,” says Davidson. “Walls are rated R52 and the roof is R90.”

Relaxation of design guidelines is critical to success, he says.

“That’s one of the key barriers that cities need to get rid of right away,” Davidson asserts.

More than 10 years ago, the City of Vancouver set the goal to become the greenest city in the world. Currently ranked as the city with the lowest greenhouse gas emissions per person in North America, Vancouver is well on its way to achieving its goal.

The City offers developers a range of design incentives to encourage the construction of Certified Passive Houses including a 2% floor area incentive and extra height.

And it shows. Business is booming for Lanefab with a total of 15 homes under construction including six Passive Houses.  “It’s been crazy busy,” says Davidson.

“We expect there to be more and more demand,” he says.

That being said, Lanefab is ready to take on more clients. “If anyone wants a Passive House anywhere in the country we can do that as a design,” says Davidson. They would have to work with a local contractor.

According to Davidson, Lanefab collaborates quite extensively with their competition. “There is value in collaborating rather than competing,” he says.

Looking to the future, Davidson is keeping his finger on the pulse of City regulators and eagerly anticipating the arrival of the zero emissions building.

The City of Vancouver plans to transition to zero emissions buildings in all new construction by 2030 by setting limits on emissions and energy use in new buildings.

Incentives are already on the table, with $10K-$20K to offset cost of certification to help out early adopters.

Lanefab and Davidson are ready.