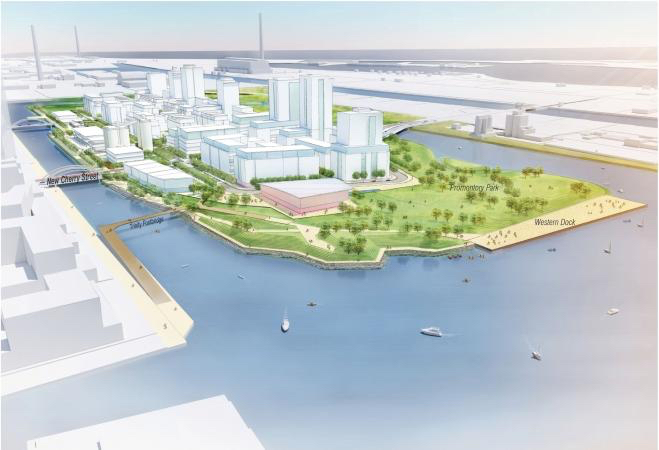 Federal, provincial and municipal government have committed to spending $1.185 billion on the Toronto Port Lands Flood Protection project that will lead to extensive development of a major stretch of Toronto’s waterfront.

At a June 28 news conference, Prime Minister Justin Trudeau, Ontario Premier Kathleen Wynne and Toronto Mayor John Tory joined Waterfront Toronto CEO Will Fleissig to announce joint the funding for Waterfront Toronto. The Government of Canada will contribute as much $384 million to this project, and the Government of Ontario and the City of Toronto will each contribute more than $400 million.

These investments will help protect Toronto’s Port Lands from flooding and lay the groundwork to transform the underused industrial area into a vibrant and resilient downtown neighbourhood, a news release says.

In the last decade, global warming has resulted in increased flooding in urban areas. The project will provide critical flood protection through the creation of a naturalized mouth for the Don River. It will also help clean up contaminated soil, unlock land ripe for development, and establish new aquatic habitats and wetlands that support native species.

These efforts will help support the long-term transformation of the Port Lands into new mixed-use communities with residential and commercial development – including affordable housing – surrounded by parks and green space.

The Port Lands Flood Protection project will take approximately seven years to complete.
These funds are in addition to an earlier announcement of $65 million in infrastructure funding under the Clean Water and Wastewater Fund for the Cherry Street Storm Water and Lakefilling project. This amount is included in the total $1.25 billion cost for the Port Lands Flood Protection project, the news release said.