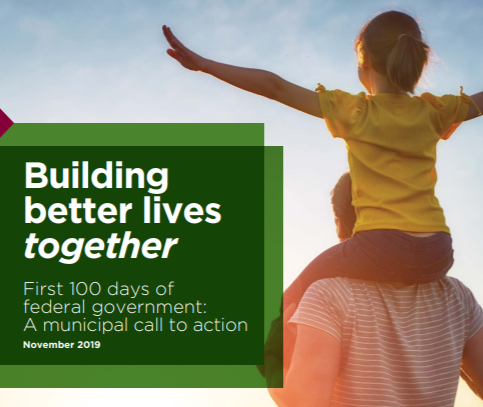 The Federation of Canadian Municipalities (FCM) has released its recommendations for the new government the fall election where the Liberals returned to power with a minority government.

“Working together to get things done is where local governments excel, and we’re eager to work with this government and this parliament to make people’s lives better.”

FCM’s call-to-action, Building Better Lives Together, is a vision of cities and communities of all sizes, in every Canadian region. It urges the federal government to move quickly—in its first 100 days—to engage municipalities in 15 policy areas, including:

“Today, we’re offering a way to bring Canadians together—by joining forces to boost their quality of life, in very concrete ways, in every region of this country,” said Karsten. “If you want to build better lives, you need to engage the governments closest to Canadians.”

The Federation of Canadian Municipalities (FCM) represents about 2,000 local governments at the national level.