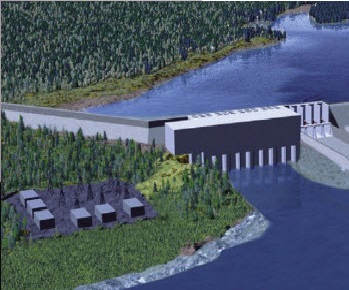 Construction of transmission lines needed for the $6.99 billion Muskrat Falls project is continuing, even though the main contractor is on the verge of bankruptcy.

An Emera Inc. spokesperson says the company is monitoring the situation with Abengoa S.A., although it hasn’t had an impact on the Labrador hydro development. “

Abengoa has begun erecting poles for grounding lines. That work is continuing,” Neera Ritcey said in an interview with the Chronicle Herald. Abengoa, a Spanish energy conglomerate, has filed for creditor protection in that country. It is one of three main contractors on the project, with a US$ 155 million contract awarded in March by Emera Newfoundland and Labrador.

Spanish law gives the company four months to hammer out a deal with creditors, according to Reuters.

The company has US$9.5 billion in debt and is trying to find additional investment, the report said. If Abengoa goes under, it would be the largest corporate bankruptcy in Spain’s history, Reuters said.

The Emera subsidiary is overseeing construction of the new transmission lines, including the $1.55 billion Maritime Link. The subsea cable, slated to be operational in late 2017, will span the Cabot Strait.

Ritcey said there are provisions in the contract to protect ratepayers, suppliers and Emera, although she wouldn’t say what they are.

“While we can’t discuss the details of that, we’re confident that those will allow the work to continue,” the spokeswoman said.

Early civil construction is completed for converter station sites in the two provinces, she said. ABB Canada of Montreal will build the transmission compounds, converter stations and substations.

Right of way clearing has also been finished for four of the project’s five transmission lines.