Niagara Regional Police (NRP) Chief Jeff McGuire says he will hand over a probe into the findings of a Niagara Region audit report of the Burgoyne Bridge project to Ontario Provincial Police, the St. Catharines Standard reports.

In a news release, McGuire said while he is confident NRP officers could conduct a “full, fair and impartial” investigation, he will nonetheless accept a request from the board to hand the probe over to an external police service.

“I want to be very clear that I have every confidence in the skills and abilities of the NRPS and in particular Det. Sgt. Paul Spiridi,” the chief wrote. “That said, I concede that it is possible that due to the amount of public attention this matter is receiving, a perception of conflict may be held by some.”

Niagara’s regional council recently received a draft copy of a forensic audit report by Deloitte Canada about the bridge project, where costs have ballooned to more than $90 million from the original $59 million estimate.

The project was designed by consulting engineer Parsons, and the bridge’s general contractor is Pomerleau Construction. Other project partners include Canam-Bridges, a division of Canam Group Inc., the steel contractor fabricating the girders, and Walters Inc. which is both the erector as well as the arch fabricator.

The draft report has not been made public, although officials expect a redacted version of the report will be released sometime in March.

The police say in the news release:

In June 2016, the Niagara Regional Police Service (NRPS) assumed the responsibility of working with Deloitte to investigate allegations of improper activities surrounding procurement and contract awarding issues for the Burgoyne Bridge Replacement and to determine if there was any criminal activity identified.  In accordance with the Provincial legislation that governs policing in Ontario; the Police Service Act, this investigation has been properly in the hands of the NRPS.

On Wednesday, February 22, 2017 shortly before 4:00 pm, the NRPS investigator assigned to the investigation; Detective Sergeant Paul Spiridi and the Office of the Chief of Police received the revised Deloitte final report from legal counsel for the Regional Municipality of Niagara (RMON).

Shortly before 10:00 am on Thursday, February 23, 2017, the Police Services Board (PSB) passed a motion requesting that the Chief of Police request the Ontario Provincial Police (OPP) and/or Royal Canadian Mounted Police (RCMP) to be asked to take over the investigation due to alleged involvement of RMON staff.

Niagara Council has approved a motion to release a redacted version of the final report to the public, which is expected to happen sometime before April.

The police services board motion says the audit identified “several matters which Deloitte recommends should be subject of further investigation by law enforcement authorities.” The motion said NRP officers deal with regional politicians and staff on a regular basis, potentially creating conflicts of interest.

Regional council began its inquiry into the bridge project last spring by ordering a value-for-money audit after the costs of the bridge reconstruction ballooned by tens of millions of dollars from the original estimate.

Council then asked for the forensic audit May 19, 2016, after suspicions arose of possible “fiduciary impropriety” related to the project following an anonymous tip, the Standard reported. 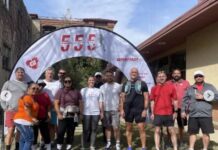