Governments of all levels and political stripes have concluded that to have a functioning and effective economy, they must address the need for the skilled trades. A shortage of tradespersons leads to higher labour costs, which in turn leads to higher home prices, less housing inventory, and longer wait times for virtually everything consumed within our economy. Governments must work together to solve this problem that has directly and indirectly impacted our economy and so many Canadians.

For years, many studies have come to similar conclusions regarding the imminent exodus of journeypersons. Each indicated substantial losses in journeypersons with an upward number of approximately 750,000 retirements (Conference Board of Canada data) over the next few years. In addition, the percentage of employers sponsoring/hiring apprentices has remained stagnant at around 18%.

Multiple provincial authorities have reported that approximately 50 percent of apprentices leave their trade after the second year. Across Canada, only 34% of apprentices go on to successfully complete their apprenticeship training and earn their Certificate of Qualification. When compared to other professional occupations, this is a woefully low number.

These datapoints show the ineffectiveness of public policies to date. Governments need to implement public policies that address not only the encouragement and the registration of apprentices, but that provide sustained supports and capacity for sponsoring employers and apprentices alike, leading to better retention rates.

But without a complete change in attitude from individuals or governments, the dated incentives put in place from governments may be too little and too late to have any impact.

A recent study by 3M Canada indicates that 76 percent of respondents say they would never pursue a skilled trade for themselves. Unfortunately, parents rarely encourage their children to pursue a trade or consider the skilled trades as an option for only those without the marks or perceived intellect needed to go to university or college.

While incentives in the form of wage subsidies to encourage employers to take on new apprentices have been around for some time, they have had little to no perceivable impact on the replacement of retiring journeypersons. These types of programs have been an inch deep and a mile wide. If governments are truly invested in solving the problem, then they really need to put in place more robust programs that include, but aren’t limited to, extended daycare options, tools to help small- to medium-sized businesses maximize opportunities to encourage them to take on new apprentices, mentor supports, mobility supports beyond mileage, along with many other retention tools.

Some governments have focussed their attention on the organized sector as a solution to solving the skilled trades gap. But roughly 80 percent of employers employ non-union workers, so government efforts disproportionately only serve a segment of the economy that are already doing it well. Unions, through their training trust funds, have exceptional training programs, instructors, and other supports that lead to a higher-than-average completion rate when compared to national and provincial average.

Finally, governments need to ensure that programs that address the two ends of the skills gap ‘stick’- the employer side and the apprentice side – are rewarded. These programs need to address the impediments to entry, completion, and retention such as the cost of tools, wage subsidy, travel, and childcare among many issues.

A good friend and colleague recently said, “There are two generational issues that exist, that if not solved will lead to our ultimate demise – climate change and the skills gap.” In both these cases, we’ve started to walk down the road toward solutions, but without engaging or getting the attention of the stakeholders that can help, we will just keep missing targets and failing.

Craig Brockwell is the Director of External Affairs for Support Ontario Youth. 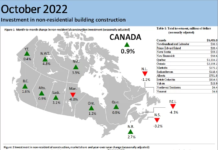