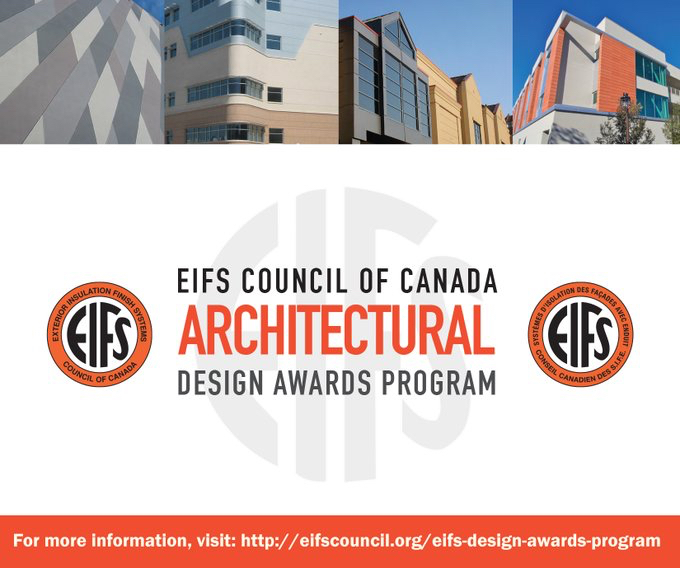 The EIFS Council of Canada (EIFS) has introduced an Architectural Design Awards program to honour design professionals and firms that incorporate EIFS products into innovative and creative built projects.

Founded in 1987, the ECC was formed to represent the Canadian EIFS (Exterior Insulation and Finish Systems) industry across Canada and all its user sectors. The EIFS Council looks back over the industry’s 40-year history in Canada to chart the course forward – advancing innovation balanced with preservation and supported by independent and government validation.

“With this awards program, the EIFS Council of Canada wants to recognize and honour projects that have used EIFS in an innovative way,” ECC president and CEO John Garbin said in a statement.

“The goal of this awards program is to create a new benchmark in EIFS construction. The use of EIFS will help us realize Canada’s national objective of creating resilient, sustainable buildings.”

The ECC says the awards program is open to all architects, architectural firms, builders or design professionals that have designed and completed a building located in Canada which utilizes EIFS. Eligible buildings must be occupied no sooner than Jan. 1, 2015 and no later than Jan. 31, 2017. Eligible applicants may submit their projects in one of five categories: 1) low rise residential, 2) high rise residential, 3) commercial/retail, 4) recreational/institutional, and 5) renovation.

Registrations to determine eligibility are open until Jan. 30, 2017. Eligible competitors have until April 7 to prepare their electronic submission packages.

The ECC says award finalists will be announced on May 7. Award recipients will be named in a press release and featured in articles submitted to prominent Canadian architectural and construction publications. The recipients will be selected by a jury of industry experts from a variety of backgrounds who will consider the submissions in relation to a range of established criteria to decide on a winning project. Details are available on the website below.

There will be one Grand Award winner with a maximum of two honourable mentions for each category. Award recipients will be honoured at the EIFS Council of Canada Annual General Meeting and Awards Reception on June 13. More information about the awards program is available at eifscouncil.org/eifs-design-awards-program.