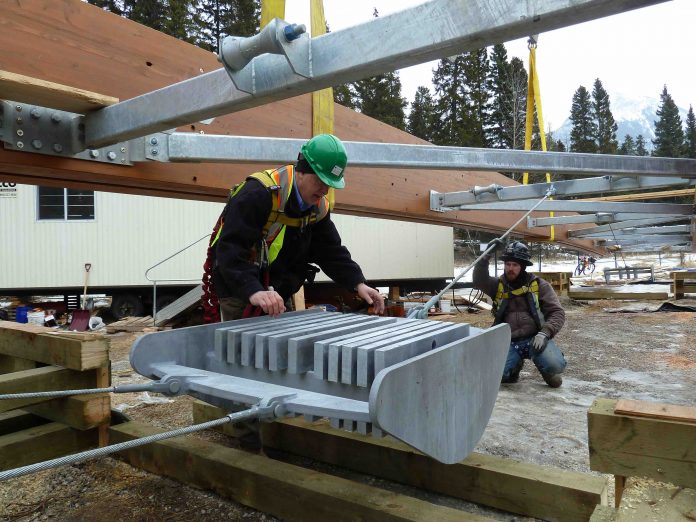 StructureCraft Builders Inc. has been recognized by the Canadian Design-Build Institute (CDBI) in its 2016 Design-Build Awards of Excellence, presented at the National Design-Build Conference in Winnipeg in the civil category for its Footbridge over the Bow River project in Banff, AB.

StructureCraft president Gerald Epp says the footbridge, which also won several international and national awards for engineering and construction innovation, and was delivered on time and under budget, involved several challenges. “The location is high profile, right in the town of Banff, and within Canada’s oldest national park, thus subject to extreme environmental scrutiny.”

Driving the agenda was the pressing concern that existing sanitary pipes installed below the river at this location some 50 years earlier could fail, spilling raw sewage into the river.

Besides aesthetic and environmental considerations, the bridge needed to carry the new pipes, as well as provide a secondary access for emergency vehicles.

He says to respect these and also economic demands to keep the span as short as possible, the team responded by installing piled supports “just outside the normal river channel, yielding a clear span of 80 m, which for timber bridges is one of the longest. The use of natural materials, like timber, was a strong desire of the client.”

Epp says the location, one of the most stunning in the Rockies, also demanded elegance. He says the team sought to make the bridge as slender as possible, resulting in the main technical challenge – how to deal with potential vibration discomfort.

“We created a stepped glulam girder to follow the flow of the forces, very thin in the middle, and developed two custom-made tuned mass dampers which suspend below the bridge deck to offset vibrations from both walking and jogging frequencies,” he said.

Construction challenges included carefully drilling piles within the river channel to not disturb the pristine Bow River environment, and erecting the bridge’s three main sections, up to 60 tons each, with a 500-ton crane positioned at 100 per cent capacity over thawing river bank soils.

A description on the CDBI website says: “The clear span of 80 metres is one of the longest in the world for a timber bridge. Planning the fabrication of the very long laminated beams to exacting tolerances required finite element analysis. Construction staging required careful planning and had to consider seasonal windows and annual high water, as well as crane support for the large inserted center section. The cable guard rail system presented challenges related to the seasonal temperature extremes and the potential elongation/contraction of the cables.”

To ensure success, Epp says a parametric 3D model of the entire bridge was created early, allowing rapid investigation of a multitude of design decisions, providing visual feedback to both the designer and client. “A tight site and harsh winter, coupled with a desire to complete the lifts before spring thaw, made ease and accuracy of assembly in the field critical.”

Since the main structural elements of the bridge were too large to be transported to the site and fitting up the pieces over the river with a smaller crane would have presented significant environmental and safety challenges, individual elements were prefabricated in the shop and shipped to site as a kit of parts.

“All cutting, drilling, sanding and finishing was performed indoors under controlled conditions so that members are permanently protected. Jigs were built to ensure accurate assembly of the main bridge components on the riverbanks. In all, the entire bridge superstructure was erected in three lifts over two days, with the heaviest assemblies weighing in at over 50 tonnes.”

Other design elements include: concrete abutments at either end of the crossing tie that down the haunch ends, but also house the pump station, eliminating the need for any additional above-grade structures and horizontal steel trussing that provide both the diaphragm and support for the service pipes just below the bridge deck. It is configured such that only the timber is continuous, resulting in very little length expansion.

In order to ensure a 75-year design life, careful consideration was given to detailing including: A visually minimal stainless cable guardrail system involving 135m long continuous cables which received focused, fine-tuned pretension analysis to ensure adequate tension in the summer, and avoid overtension in the winter; spacing between the paired glulams to allow full ventilation; and shingled heavy gauge flashing which creates a strong drip edge protecting the beam faces. Glulams are additionally coated with a system which behaves like a breathable membrane and is easily re-coated.

A partner with Fast+Epp Structural Engineers for more than 25 years, Epp began StructureCraft with the idea to design interesting timber projects, and also build them. “We began taking on these projects, almost always involving timber that is exposed to view, and exploring what could be achieved with the architects and clients, in a design-build format.”

The first project StructureCraft completed was for the Vancouver Aquarium with the the late Bing Thom architect. The company was also involved in 2001 with the Central City complex in Surrey. “In 2006-08, one of our greatest opportunities came with a contract to design, fabricate, and install the wood panel roof for the 2010 Olympic Speed Skating Oval, a 250,000 sq. ft. feature roof that was endowed with many awards.”