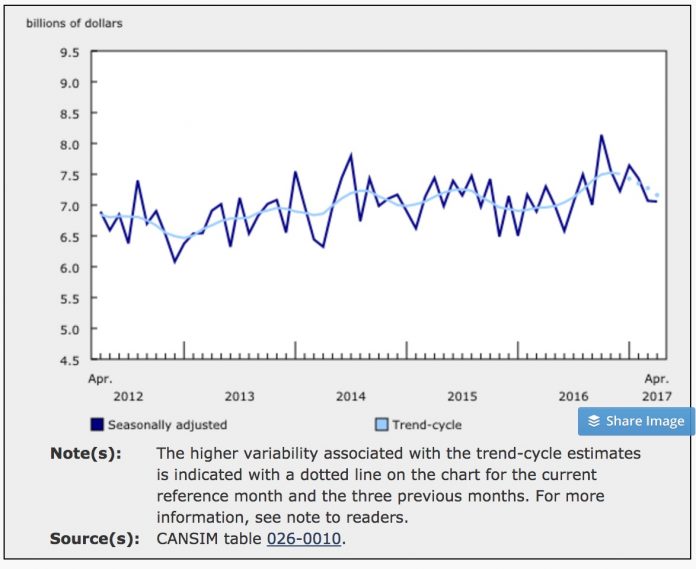 Canadian building permits declined in April with fewer construction plans for single-family homes in Ontario, where a lack of supply has driven up home prices in some markets, according to Statistics Canada data.

Permits dipped 0.2 per cent, the third monthly decrease in a row. Overall permits were $7.1 billion. Figures for March were upwardly revised to show a decline of 4.9 per cent from the previously reported 5.8 per cent decrease.

Residential building permits declined 2.5 per cent as plans for single-family homes declined, offsetting a gain in intentions to build multi-family buildings, such as apartments.

The single family home decline was exceptionally large in Ontario, at 8.1 per cent.  Plans in Toronto for single family homes fell to the lowest level since 2016.
.
Tight supply is partly to blame for home prices that have been surging in Toronto until recently, economists say. Price gains have cooled recently, however, following new housing rules aimed to dampen demand.

Municipalities issued $2.6 billion worth of building permits for non-residential structures in April, up 4.1 per cent from the previous month, Statistics Canada reported. The increase was mainly the result of higher construction intentions for institutional and industrial structures, with both components rising for a second consecutive month. Eight provinces registered gains in the non-residential sector in April, led by British Columbia.

The institutional component rose 10.7 per cent in April to $790 million, following a 18.3 per cent increase in March. Higher construction intentions for government administration buildings and medical facilities, including a major hospital renewal project in Ontario, contributed most to the gain. The institutional component rose in six provinces in April, led by British Columbia.

The value of building permits issued for industrial structures rose 14.6 per cent to $512 million in April, following a 12.3 per cent gain the previous month. The increase in April was mainly attributable to manufacturing plants, utility buildings, and maintenance facilities.

In contrast, the commercial component decreased 3.0 per cent in April to $1.3 billion, largely due to lower construction intentions for warehouses in Ontario.