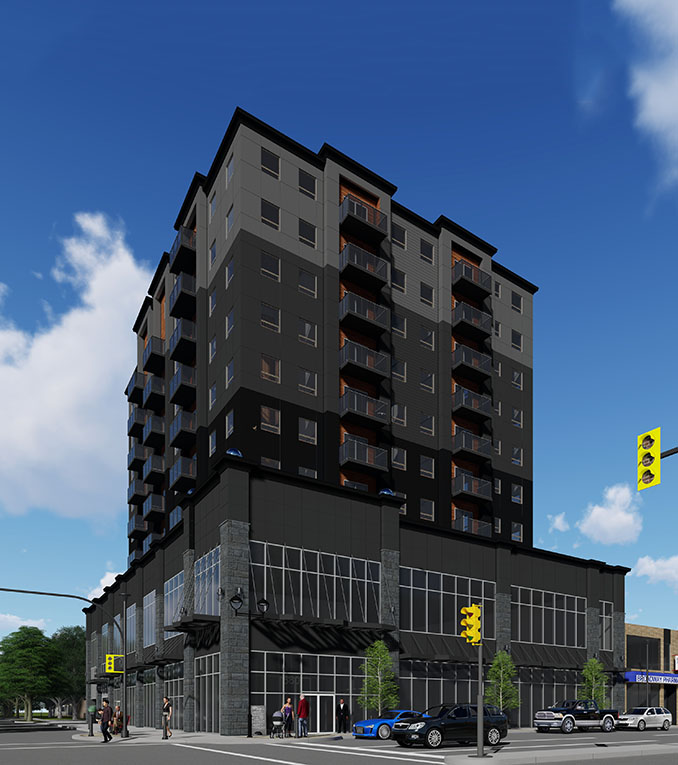 A Vancouver social housing project requires $4.5 million in repairs less than a decade after a local contractor was paid $8.5 million to construct the structure.

The Vancouver Sun reports that it isn’t clear about who is responsible for the deficiencies at the four-storey Dunbar Apartments, owned by B.C. Housing. The building has 51 studio apartments with support services for people who were homeless or at risk of becoming homeless.

The provincial agency says said it had identified “deficiencies with some of the materials and construction methods utilized on the exterior of the building.”

“The scope of work includes a complete replacement of the brick veneer and replacement of the metal cladding panels in some locations due to inadequate strength of material and installation methods,” said a statement from B.C. Housing spokeswoman Laura Mathews. “Crews will also be removing and reinstalling all windows to ensure proper waterproofing.”

Mechanical upgrades are also underway in the basement parking level and the balcony drains are being replaced, because “water is accumulating up to the emergency balcony overflow drains,” Matthews said.

The problems were not caused by damage by any of the residents, said Susan Hancock, a spokeswoman for Coast Mental Health, the charity that operates the building. No tenants have been moved during the work, she said.

Aquila Construction Inc. was awarded a $8.54 million contract to build the apartments in 2010, the Sun reports. Davidson Yuen Simpson Architecture was the architect.

Dane Jansen, a partner at the architecture firm now known as DYS Architecture, said B.C. Housing had not contacted his company about any deficiencies or repairs as far as he was aware.

Aquila president Derek Bosa said the first he heard about the Dunbar’s deficiencies was when The Sun phoned the company’s offices this week to inquire. After the Sun provided B.C. Housing’s description of the Dunbar Apartments’ deficiencies to Bosa, he replied by email to say: “All I can offer is that this issue is pending further information and discussions with B.C. Housing.”

The Association of Professional Engineers and Geoscientists of Alberta (APEGA) says structural problems with a condominium in Fort Saskatchewan, northeast of Edmonton, relate to the work of a former professional engineer whose permit had been cancelled in 2004.

Residents of a building in the Riverview Estates condominiums were evacuated on Aug. 2 after an engineering assessment that the structure is unsafe.

“Upon learning about the evacuation, APEGA contacted the City of Fort Saskatchewan’s safety codes officer and its director of protective services,” the association said in a statement. “APEGA confirmed with the city that the structural engineering firm and professional engineer on record for the structural design of the building were Jacobsen Hage Engineering and Sven Hage. In addition, APEGA provided the city with the current status of the firm and engineer.

“Due to provisions in the Engineering and Geoscience Professions Act, APEGA can take no further action against Hage. The current legislation limits investigating complaints to two years following the cancellation or resignation of a person’s licence. As part of APEGA’s legislative review, we are working with the Government of Alberta on more than 160 APEGA-recommended changes to modernize and strengthen our legislation, including the limitation on investigations.”

The developer behind a 10-storey apartment building under construction in Saskatoon’s Broadway business district is seeking a property tax break worth $788,535.

A City of Saskatoon report estimates the developer’s investment in the residential-commercial property, including the land, is $23.5 million, the Star-Phoenix reports. The developer plans to build eight stories of apartments (with 68 units), along with two storeys of commercial space and two underground parking levels. The former Royal Bank site has been vacant since the building was demolished in 2016.

A company called 880 Broadway Holdings Ltd. is listed in the report as the applicant for a five-year tax abatement, but the project is listed on the website of Saskatoon-based Baydo Development Corporation Ltd., the newspaper reported.

City administration recommends the tax break be approved under a program intended to encourage development of vacant lots.

The project is expected to be completed in the spring of 2021 and any tax abatement would start the following year, the report says.

The Winnipeg Construction Association (WCA) says there is a need to increase efforts in by the next Manitoba government to reduce trade barriers.

In its newsletter the associations says: “Specifically, we’d like to see the next provincial government:

WCA vice-chair John Enns outlines in a video why breaking down trade barriers is important for the construction industry.

On Sept. 1, bidding for projects for the City of Toronto will officially transition to e-bidding solution SAP Ariba Sourcing. The city has conducted training courses for suppliers to become familiar with the SAP Ariba system in advance of the change.

Additionally, the city has created training systems online, for suppliers to attempt a mock request for proposal, request for tender, and request for quotation, to make sure they understand the online process.

Suppliers also need to register on the SAP Ariba network in advance of bidding.

Transitioning to e-bidding is intended to make the procurement process faster and more efficient, reducing the amount of time it takes to award a contract. Notification functions within the system allow bidders to comply with addendums as they arise, or be made aware of updates or cancellations of the competitive process.

While bids can be downloaded and printed through the system, all bids and proposals must be completed online.

SAP Ariba is a cloud-based business-to-business marketplace. Its functions allow suppliers to search opportunities across the network, and be notified of upcoming opportunities.

As proposals transition to the new online platform, there will undoubtedly be some growing pains. For instance, for all bids submitted during August for solicitations posted on the existing online call document system, responses need to completed and delivered to the physical location at city hall.

The change to SAP Ariba has been ongoing since November of 2018. During the rollout, some opportunities were posted on the existing system, and some on the new. While all bids and request for proposals submitted after September 1 will have to be completed through the SAP Ariba system, the opportunities document will still show up on the City of Toronto Online Call Document page.      Questions regarding solicitations will also need to be posed through SAP Ariba.

City of Toronto staff that handle the bidding process will remain constant throughout the transition.
Quebec

Quebec’s administrative labour tribunal has declared regional hiring priority clauses in the construction industry invalid and inoperative, saying they impeded on rights to freedom and privacy, the Montreal Gazette reports.

Though the tribunal is invalidating two articles of the regulation relating to the hiring and mobility of construction employees in the province, it’s suspending its decision until collective agreements in the construction industry can be renegotiated, the Gazette reported.

Current collective agreements are set to expire on April 30, 2021. The decision is therefore suspended until their renewal.

Issues surrounding regional hiring priority in the construction industry stem from the demands of regional workers. They want to be able to work at construction sites in their own areas, rather than having a contractor who wins a contract come with his own workers from another region.

This situation has caused friction between regional and outside employees.

Judge Raymond Gagnon said in his decision that employees’ right to privacy and their freedom to establish their homes in a place that is convenient to them is being infringed upon. He also ruled that there’s a restriction for employers to hire employees they need based on where they live.

Gagnon said he sees a “force of inertia” and a system that has “become difficult to justify in the current economic and social context. It is therefore not possible to justify the current rules of regional hiring priority,” the newspaper reported.

Feds and province to invest $394.2 million in social housing projects

The federal and provincial governments have recently signed an agreement to provide long-term funding for community housing in Nova Scotia.

Federal Minister of Rural Economic Development Bernadette Jordan and Nova Scotia Minister of Municipal Affairs and Housing Chuck Porter said in Windsor, N.S., that they had reached a bilateral agreement to prioritize affordable housing that will be cost-shared by the two governments.

The two governments will also work together on the design and implementation of a new Canada Housing Benefit for the province to provide affordability support directly to families and individuals in housing need.

“We will now work with Canada Mortgage and Housing Corporation to finalize the first three-year action plan that will advance our provincial housing priorities, providing more affordable and accessible housing options to those who depend on it, especially for our most vulnerable citizens,” Porter said.

The government of Nova Scotia will develop and publish three-year action plans, beginning in 2019-20, setting targets and outlining how it will use federal and cost-matched funding to achieve the desired outcome.

A major Moncton landowner sought special recognition as city council directed staff to have a patio removed from a city nightclub which was built without proper building permits, CBC reports.

Coun. Bryan Butler said city council twice directed municipal staff to have the property owner remove what had started as a patio in 2007 but had become a year-round enclosed addition to a Robinson Court nightclub by 2017, the broadcaster reported.

“I am very upset, and the buck stops with the city manager, that twice city council has given direction … and it’s never been done,” Butler said at a council meeting.

The report relates to Rouge Premiere Lounge, a nightclub that opened in 2006 in a building owned by Galco Atlantic Investments Network Ltd. on Robinson Court.

The report says city manager Marc Landry told council during a spring 2019 private meeting that councillors should remember the property owner has millions worth of downtown holdings.

The report says Landry said “maybe we should treat him different.” It says Mayor Dawn Arnold said she did not want to take on the landowner. Private meeting minutes reviewed by CBC do not reflect the statements.

“The context of my comment regarding the landowner was to provide information to elected officials on whether or not they wished to allow the individual an opportunity to speak to them,” Landry said in an email to CBC.

The federal and provincial governments and local municipalities have announced $14.4 million in infrastructure investments in 16 eastern Prince Edward Island projects.

The work includes construction and renovation of cultural, recreational, water and wastewater projects, government officials said in a news release.

The federal government is contributing about $5.3 million at the projects through the Investing in Canada infrastructure plan and the province will spend about $6.2 million. Some of the projects also have municipalities and non-profits adding cash.

The most expensive project is $3 million to be spent on new trails in Stratford to connect to the existing Confederation Trail network.

The federal government will provide more than $1 million funding to the Office to Advance Women Apprentices of the United Brotherhood of Carpenters Local 579, for its Engaging and Enhancing Women in Apprenticeable Skilled Trades project, the government says in a statement.

Through this project, more than women from Newfoundland and Labrador, Prince Edward Island and New Brunswick will get support in a number of areas such as exposure to the skilled trades as a first-choice career option, leadership and safety skills training, welding certification in partnership with the Canadian Welding Bureau and employment supports, as well as networking opportunities to further pursue their certification.

This project is funded through the Women in Construction Fund, which supports projects building on existing models that have proven to be effective in attracting women to the construction trades. These include mentoring, coaching and tailored supports that help women to progress through their training and find jobs.

Approximately 2,800 women are expected to benefit from the Women in Construction Fund, which is receiving funding of $10 million over three years, starting in 2018-19.