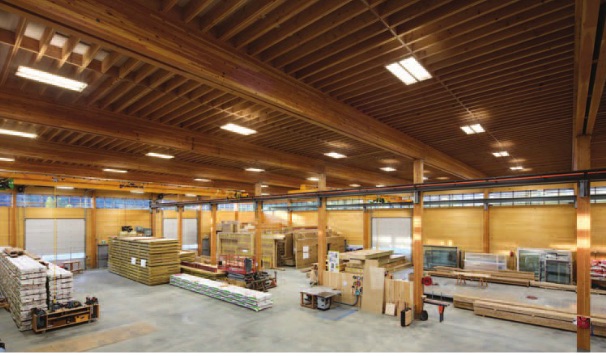 BC Passive House Plant has been recognized with the Environmental Performance Award in Wood WORKS! B.C.’s 2015 Wood Design Awards.

BC Passive House is Canada’s first prefabricating plant to produce a wood panelized system that meets European Passive House (PH) Standards. These standards define the total annual amount of energy that can be used for heating and cooling and for primary energy usage. The award release notes “the project won for demonstrating how wood products can play a significant role in improving the environmental performance of a structure.”

The plant results from a partnership between Matheo Durfeld and his wife Heather, owners of Durfeld Constructors, and Eric Karsh and Robert Malczyk, two highly-respected engineers in the field of innovative timber construction. Durfeld says the partnership provided both the financial resources to create the plant and the ability to be innovative in responding to a changing market.

Despite the recognition the award confirms and the attention he has been getting in recent years, Durfeld is a humble man who credits fate as much as anything for his current success. “There are two kinds of people; those who plan and chart a deliberate course and then there are people like me who find life happens and one thing leads to another.”

Here Durfeld refers to his introduction to Passive House construction, which came somewhat by chance when a group of Austrians approached the company to construct the Austrian Olympic Passivhaus. The project, a collaboration between five private Austrian companies, forming the Austrian Passive House Group, intended to use the first “Green Olympics” to showcase their building products and demonstrate the Passive House Standard to the world.

Durfeld says the group was attracted by his reputation as a custom log home builder, a natural fit since much of Austria’s passive house construction is wood-based. Though Canadian-born, Durfeld himself is of Austrian heritage, another fated connection.

He says he and his wife travelled to Europe to visit facilities creating PH to understand the process and then acted as general contractor for the project, putting together the prefabricated structure crafted in Austria and delivered here. The Austria Haus became Canada’s first registered Passive House.

“Though I understood the concept and believed in what was possible, my own ‘aha’ moment came on a cold day, just after the house was closed in when I walked inside and felt the warmth and comfort generated throughout the building by a small, 1,500 watt heater.”

That moment of intellectual buy-in and the next several months of touring people through, explaining the concept and process, made him something of an expert.

Wanting to make the Passive House real and more common, Durfeld and his wife bought a lot and constructed the first Canadian residential passive house as their own home. After third-party verification proved the PH standards had been met and achieved with mainly Canadian products, sales to other interested home owners began.

“There were three take-aways from our early projects: That prefabricated wood created an amazing efficiency; that this kind of construction is suitable for use across Canada; and that the best things are not invented but copied.” Durfeld says building science from both Canada and Europe contributes to the success of PH construction.

Durfeld began to grow his business with a small start-up operation in the interior of BC, later constructing the award-winning Passive House Plant as demand grew. “Some people come to us for PH standards, some come just looking for a low energy home and others come simply for the concept of prefab and getting a project constructed and closed in from the elements faster.”

Noting he has always been a custom builder, Durfeld says that has not changed. Despite the pre-fabrication element, each project the Passive House Plant creates is designed to meet the individual homeowner’s specifications and interest.

While prefabrication presents opportunities on site, Durfeld says the process is somewhat more rigid because decisions have to be made and finalized before work begins. Part of the process then is working with engineers and architects to ensure all details are finalized, because they cannot be changed or adjusted along the way.

The closed, structurally insulated panels also present a change for building officials who must be able to buy into the science and be prepared to approve a project based on engineering reports that the work has been properly done. “Some of our work involves educating and speaking with building inspectors to make sure they understand and acknowledge the process.”

Durfeld says as this understanding grows, he sees PH as the wave of the future. “The science behind PH creates not only an energy efficient home but a home that is more soundproof and. more comfortable. There is a great supply of fresh air, the living spaces are more equally conditioned; it is what a home should be.”