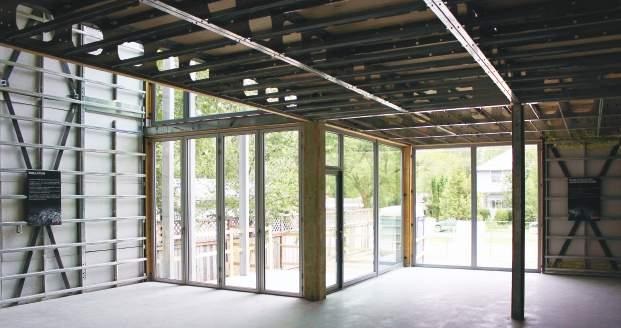 The contractor completing the first BONE Structure galvanized steel home in Saskatchewan says the construction process “is extremely intuitive” and its framework could be completed in less than two weeks, with site workers who had never before seen or touched the system.

Although the BONE Structure framing was completed in late May and early June, the home hasn’t been quite completed – because custom high-end finishes and fixtures ordered from remote suppliers still need to be installed. The property has a $2 million price tag, making it one of Saskatoon’s most expensive custom properties.

Plett said it is difficult to compare the costs of building with the BONE Structure technology compared to conventional stick and frame construction, but estimates it would cost 10 to 15 per cent more with the pre-engineered concept; though these costs certainly can be recouped over the home’s lifetime with higher quality, better insulation properties and lower operating costs.

The key to the concept is putting the thought and plan-ning into the process at the beginning. The entire home except the foundation is manufactured and shipped to the site, “every piece precut and pre-labelled, with colour-coded directions,” Plett said. “For example, Piece I4 goes to Piece I52, then the whole assembly goes on top of C5”– much like LEGO or Meccano instructions, he said.

The construction crew assigned to the project weren’t “all stars – these are guys who had never read a drawing,” he said. By the third day of the 10 day framing process, the workers were able, without guidance, to find the right pieces and complete the assembly.

“Every piece is really well thought through, and that translates through the drawings,” he said. “Every single piece down to the screws has been detailed and pre-engi-neered,” he said.

“It’s an extremely accurate build. We don’t cut anything. All the pieces are already square and straight.”

“Already there’s a built-in level of quality control,” Plett said. “If you do it wrong, you can’t do the next step to complete the process. It needs to be right.”

Of course, the foundation must be set carefully but Plett said there are provisions in the system to move the base plates slightly, “and cast your anchor – there are ways to modify the foundation” so you aren’t caught off guard with minor tolerance variations.

Plett says he sees immediate application for the BONE Structure technology concept in certain commercial and institutional projects, such as care homes, schools and car washes. “It is built from inorganic based materials – the system doesn’t have mould, rust or rot” and would be use-ful especially for multifamily residential properties, condos and hotels up to four storeys tall,” he said.

He is currently pricing out a care home in Saskatchewan using the system. The client is looking for a marketing advantage, with a safer, warmer and higher quality structure.

Eventually, Plett believes the BONE Structure Technology may find application in tract homes. “Trades don’t spend a half day cutting homes,” he said, using the system. “If you are going to do a whole tract, planned out, you’ll achieve increased efficiency, and these efficiencies will give you more and more options.”

The construction includes a lightweight, recycled steel frame, which enables homeowners to have a reconfigurable open space concept, without intermediate beams or interior load bearing walls, a BONE Structure news release says. Electrical, plumbing, heating and ventilation systems are connected thanks to precut openings acting as veritable “highways” within the structure, just like an air-plane fuselage, the company says.