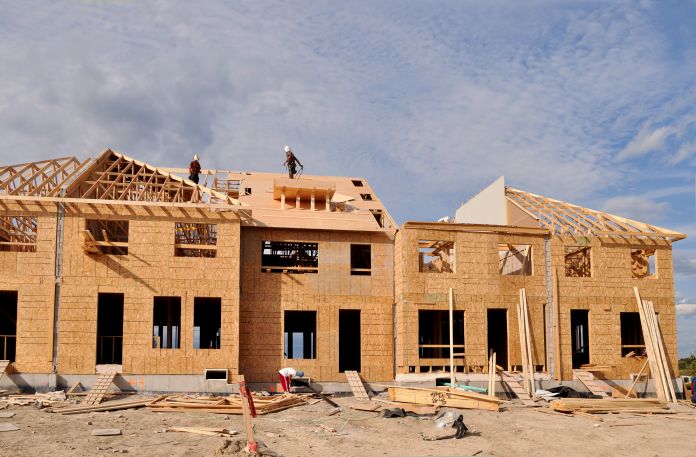 Canadian municipalities issued $8.8 billion worth of building permits in December, an increase of 6.0% from November and the fourth consecutive monthly increase. The gain was largely due to higher construction intentions for multi-family dwellings and commercial buildings, with both components hitting record highs.

The value of residential building permits was up 4.2% in December to $5.3 billion. Six provinces posted increases, led by British Columbia, StatsCan reported.

The value of building permits for single-family dwellings was down 5.4% to $2.0 billion. Four provinces posted declines, most notably Ontario, which reported its lowest value since March 2014.

The value of building permits issued for non-residential structures rose 8.9% in December to $3.5 billion. Increases were reported in seven provinces, most notably British Columbia.

In the commercial component, the value of permits rose 14.6% to a record high of $2.3 billion in December. Eight provinces recorded advances, led by British Columbia (+$150 million) and Ontario (+$112 million).

The value of industrial building permits was up 11.9% to $588 million, mainly as a result of higher construction intentions for maintenance buildings.

In contrast, the value of institutional permits fell 10.6% to $606 million, the third consecutive monthly decrease. Lower construction intentions for hospitals were the largest factor in the decline.

The total value of building permits was up in six provinces in December, with British Columbia reporting the largest gain. Across the country, the value of permits rose in 21 of the 36 census metropolitan areas (CMAs). Vancouver led the increases (+$290 million), followed distantly by St. Catharines–Niagara (+$92 million).

In British Columbia, the value of permits rose 22.0% to $2.1 billion, passing the $2.0 billion-mark for the first time. Although the growth was spread across all components, multi-family dwellings (+$168 million) and commercial buildings (+$100 million) in the CMA of Vancouver accounted for most of the rise.

The value of permits in Ontario was up 3.1% to $3.1 billion in December. The gain was largely the result of higher construction intentions for multi-family dwellings and commercial buildings. Residential permits in the St. Catharines–Niagara CMA reached a record high of $134 million, surpassing the previous record set in September 2018.

The total value of building permits rose 4.7% in 2018 to $99.7 billion, the fifth consecutive annual increase. Higher construction intentions for multi-family dwellings and commercial buildings were the main factors behind the increase. Four provinces reported gains, led by British Columbia and Quebec. The largest decline was in Ontario, where the value of permits was down 2.2% to $38.2 billion.

Construction intentions in the non-residential sector rose 3.7% in 2018 to $36.9 billion. Increases in the commercial component (+18.4% to $21.6 billion) more than offset the decline for institutional buildings (-22.1% to $8.0 billion). The decrease in institutional building permits may be due, in part, to the end of the Post-Secondary Institutions Strategic Investment Fund, as applications to the program closed in February 2018. Meanwhile, permits for industrial buildings rose 3.6% to $7.3 billion. Five provinces reported gains in the non-residential sector, led by British Columbia.