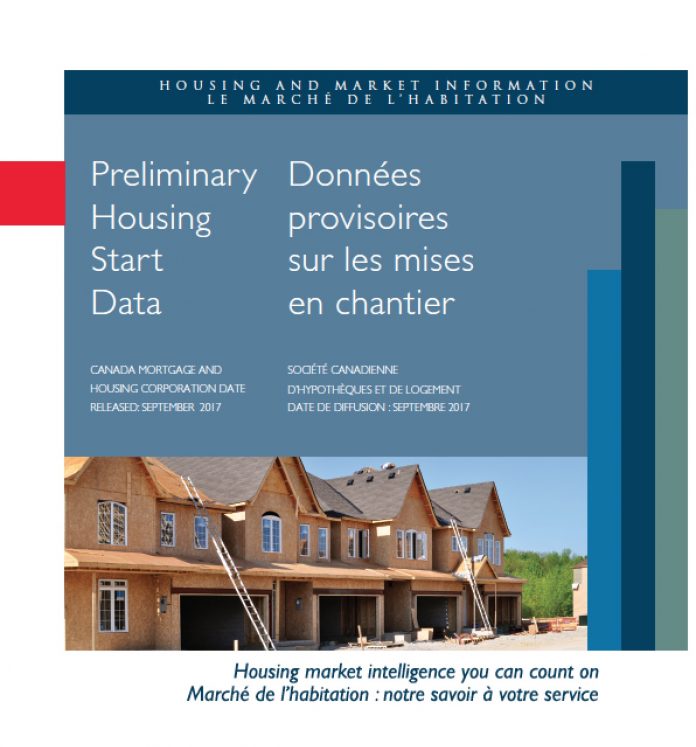 The trend in housing starts was 219,447 units in August 2017, compared to 217,339 units in July 2017, according to the Canada Mortgage and Housing Corporation (CMHC). This trend measure is a six-month moving average of the monthly seasonally adjusted annual rates (SAAR) of housing starts.

The pick-up in the single-detached market in Halifax has yet to slow with starts increasing by 61 per cent year-over-year in August. Year-to-date, single-detached construction has expanded by 28 per cent, reflective of continued development in the Spryfield and Bedford West subdivisions especially. The multiples market has also witnessed strong growth this month, climbing by 59 per cent year-over-year. With a number of projects in the pipeline to start before year-end, as well as a push to secure development agreements for projects that have been stalled, strength in the multiples market in Halifax will continue well into 2018.

In Trois-Rivières, the marked increase in housing starts was attributable to the fact that construction got under way on many new seniors’ housing units. In fact, the needs related to an aging population in the area will continue to direct a portion of the demand for new homes toward multi-unit housing.

Total housing starts in the Toronto Census Metropolitan Area (CMA) trended higher by 8 per cent in August compared to the previous month. While new construction activity of low-rise homes remains strong, last month’s momentum was mainly reached thanks to a strong increase in apartment starts, which approached a seasonally adjusted annualized rate of 36,000. The positive market sentiment towards condominium apartments in Toronto translated into stronger pre-construction sales, and subsequently into new housing starts. The unprecedented pre-construction condominium apartment sales levels seen over the past few years will ensure that high-rise construction remains strong in the near term.

Housing starts in Kingston trended higher in August. Builders started 60 homes, up from 38 a year ago. Starts of single-detached homes and apartments were higher. Year-to-date housing starts are almost double the total from the same period last year, with starts of all housing types higher. Apartment starts this year are at the second highest level in more than ten years. Greater demand for apartments in Kingston has mainly come from the aging population and students.

Total housing starts trended higher in August after local homebuilders increased production of multi-family units. After eight months this year, new home construction in Regina is continuing at a much more robust pace than in the same period of 2016. Declining new home inventory and signs of a strengthening labour market have generated more optimism among local homebuilders and pushed production higher in both the single and multiple sectors. As a result, actual year-to-date total starts were up 37 per cent in August at 1,420 units, compared to 1,039 a year earlier.

The trend measure for housing starts in the Vancouver CMA held steady in August. The pace of new home construction continues to be well above the historical average, as developers have been focussed on densifying more affordable suburban markets through the construction of multi-family dwellings. Demand for new housing is being supported by employment gains, migration and relatively low mortgage rates.

The trend measure for housing starts in the Kelowna CMA moved upward significantly in August as multi-unit housing starts, particularly starts of rental apartments got underway. So far in 2017, there have been a total of 1,366 rental units that were started, which is the most in any eight month period in Kelowna’s history. These new rental units will contribute needed supply to the market as the apartment vacancy rate in Kelowna has remained below one percent for the past two years.

Rural starts were estimated at a seasonally adjusted annual rate of 15,708 units.