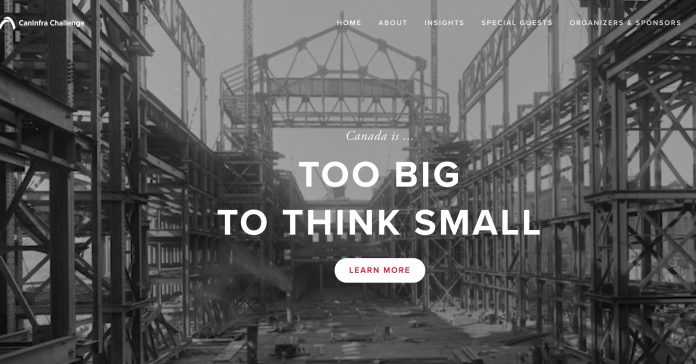 The CanInfra Challenge, a six-month public contest, has kicked off to seek out innovative ideas for transformational infrastructure in Canada. The initiative will crowdsource proposals from Canadians to tackle the country’s biggest infrastructure challenges.

“Whether you live in a city or the countryside, one thing we all agree on is the need to challenge the status quo,” says David Walmsley, editor-in-chief of The Globe and Mail, the challenge’s media partner. “What we haven’t agreed on is where improvements should be made. What is the best way to ready Canada for her future, a future where transportation becomes easier, where technology benefits society at large, and where global leadership isn’t just talked about but becomes a way of life?”

Organizers say the CanInfra Challenge will reignite that drive for the future by recognizing ideas that will have an economic and social impact, spark dialogue among leaders in government and the private sector, and advance the national conversation on infrastructure.

“The CanInfra Challenge is a call to action,” says Kilian Berz, a senior partner and managing director for Boston Consulting Group (GCG) and chair of the BCG Centre for Canada’s Future. “Canada’s spending on transportation, energy, waste and water, utilities, and communications is relatively low. We need to ask ourselves: are our current infrastructure plans sufficient to support the country that we aspire to grow into over the next century? What are transformational infrastructure projects that will allow us to take advantage of technologies of the future? We need to identify the big ideas to drive economic growth, environmental protection, and connectivity. That’s what we are after in the CanInfra Challenge.”

The private sector, university programs, think tanks, and the public are encouraged to submit compelling transformational infrastructure proposals by Dec. 31. Canadians will be offered a chance to vote for their favorite ideas online as the contest progresses.

Short-listed finalists will be given the opportunity to pitch their ideas to a panel of expert judges at the Canadian Transformational Infrastructure Summit in the spring of 2018. The winner will be announced at the end of the summit. There will also be runner-up prizes and a People’s Choice Award chosen by the public via online voting.

The summit will bring together infrastructure stakeholders from across the country to participate in discussions on key opportunities and challenges. It will also feature presentations on current project proposals in Canada.

“Today’s infrastructure leaders have an opportunity to address Canada’s most pressing environmental, economic, and social issues, from preparing cities for growth to de-carbonizing mass transport to ensuring economic inclusion of all Canadians,” says Keith Halliday, director of the BCG Centre for Canada’s Future. “The CanInfra Challenge is about crowdsourcing the very best thinking from across Canada to fundamentally change how we live, set us up for future prosperity, and move us forward as a nation.”

Throughout the contest period, The Globe and Mail and BCG will advance the infrastructure conversation in Canada by sharing a series of discussion pieces that will offer insights from senior leaders in the national infrastructure community and from around the world.

For more details about the CanInfra Challenge and the Canadian Transformational Infrastructure Summit, visit www.CanInfra.ca.