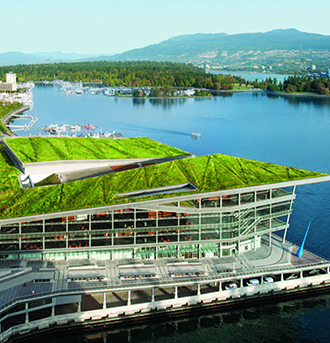 The announcement was made at a press conference in Vancouver, which included BC Minister for Tourism Lisa Beare, Vancouver acting mayor Raymond Louie, and CaGBC’s president and CEO Thomas Mueller.

“Congratulations to the whole team at the Vancouver Convention Centre for once again proving their leadership in sustainability by earning Canada’s first LEED v4 Platinum Existing Building certification,” Mueller said in a statement.  “Through the LEED v4 Platinum certification, the VCC team is ensuring that this world-class venue continues to be operated and maintained at the highest level delivering environmental and health benefits for years to come. At the same time the VCC is setting an example for convention facilities around the world while showcasing Vancouver’s commitment to environmental excellence.”

Consisting of two buildings totaling 466,500 sq. ft., the VCC is British Columbia’s flagship convention centre, hosting more than 500 events and welcoming hundreds of thousands of attendees each year, while generating significant economic activity for the province. Following its initial LEED for New Construction Platinum certification in 2010, the VCC sustainability team has been dedicated to continuing to improve operations.

“While the Vancouver Convention Centre was built to the highest environmental standard with features like our six-acre living roof, marine habitat and impressive green technologies, our commitment to the environment is more than the building, significant as it is,” says Ken Cretney, president and CEO, BC Pavilion Corporation. “When we opened our West building, we set out to be a global leader in sustainability to make a difference in our community and global industry. I am extremely proud of our team for its dedication and hard work to further our sustainability program, resulting in this prestigious second Platinum designation.”

To meet the certification requirements for the rigorous LEED v4, the VCC team introduced new sustainability initiatives and enhanced existing programs including:

To view photos and a project description, click here.