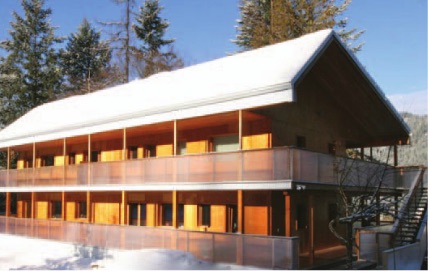 Nelson, B.C.-based Cover Architectural Collaborative Inc. is applying its diverse range of skills and expertise to projects throughout B.C. and Alberta, including Passive House (PH) design and construction initiatives.

The collaborative’s three professionals each have their own expertise and focus. For example, principal Lukas Armstrong, who grew up on a 160-acre, solar-powered ranch, concentrates on bringing energy efficiencies to each of his projects, and he is particularly invested in PH design.

“I own and live in a triplex that has been certified PH. Since there are only six certified units in Canada, you might say I am responsible for 50 per cent of the PH registrations in Canada.”

Armstrong says he has always been interested in sustainable design and, after he took a course in Vancouver specifically for PH, he applied it to his own construction project, based on a B.C. government RFP, in conjunction with Fortis. “They were looking for proponents to develop “super-efficient new construction,” achieving Energuide 91,” he said.

Lukas convinced them to accept the Passive House rating system as well because it offers a more accurate energy modelling framework than Energuide. He then collaborated with Andre Harrmann, CanPhi director and green building consultant, to develop the certified project.

Big believers in both the technology and education, Armstrong and Harrmann are scheduled to present at the North American Passive House Network Conference in Vancouver this October. They will be addressing two inter-related topics: Using predominantly standard Canadian materials and construction systems to achieve Passive House, and the economic benefits of doing so.

While he believes the industry will be easy enough to educate, he says the consumer is always the tougher sell.

“Passive House is gaining traction but it is difficult to get the public to understand they may have to spend 10 per cent more on construction but that the savings is significant and immediate,” Armstrong said. “The cost of ownership at the end of the first month will be similar to standard construction because owners are redirecting money they would have given to energy companies towards the mortgage, building equity. There is no need to wait for a payback period.”

He says aesthetics also come into play. While many architects may design PH projects as a showcase and to display architectural creativity, he says most owners prefer a home with more standard curb appeal, something that will blend into the landscape rather than stand out. “We’re designing a home in Smithers (half way between Prince George and Prince Rupert) with which we hope to demonstrate that Passive House can be more mainstream and fit well within the existing fabric of a community.”

Armstrong says having the word “house” in “Passive House” is unfortunate because the implication is then that this is all about residential construction. Armstrong says he is actively looking for key clients interested in building commercial and institutional showcase projects, noting that in Europe PH is evident in supermarkets, schools and offices in addition to multi and single family residences.

“Institutional and commercial owners – those who are invested for the long-term and those who deal with the realities of maintenance – can take advantage of PH certification to significantly reduce their energy and maintenance costs.”

With three partners and more than 60 years of combined experience, Cover Architectural Collaborative Inc. has the skills and capacity to serve the residential, commercial and institutional markets, while employing cutting-edge building science and energy efficiency strategies.