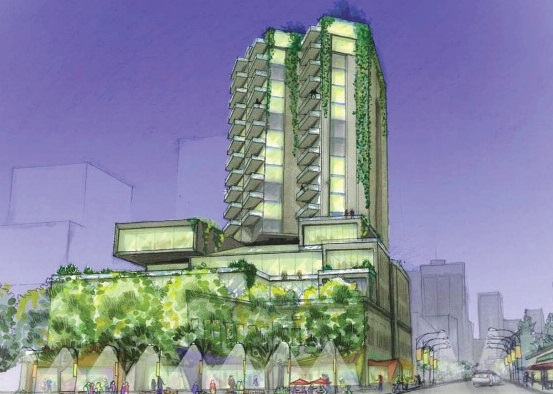 The construction of a unique downtown high rise to provide both living and working space to local artists is still at least a year away, project organizers have told the Edmonton Journal.

The proposed Artists Quarters building would cost $62 million, an increase of $32 million from the original estimates. Organizers said more detailed designs for the structure have been completed since the concept’s first announcement in 2013. As well, an added parkade has increased the projected cost.

Linda Huffman, executive director of Arts Habitat Edmonton, told the NEWS BRIEFS CONSTRUCTION ACROSS CANADA The Canadian Design and Construction Report — January 2016 – 25 Journal she is confident the project can still work, but it will depend on a successful fundraising campaign and securing provincial and federal government contributions.

“It’s a very complicated project,” she said. “It is absolutely unique in that it is being designed specifically for artists. The acoustics are heightened, the ventilation is heightened, the space is designed as open space that is adaptable for individual uses.”

The proposed downtown project site at the corner of 102A Ave. and 96th St., on the former Mount Royal Hotel site, is vacant except for the old Koermann Block building, dating back to 1913. The project calls for the historic brick facades on the north and east sides of the building to be dismantled and reassembled as part of the new structure.