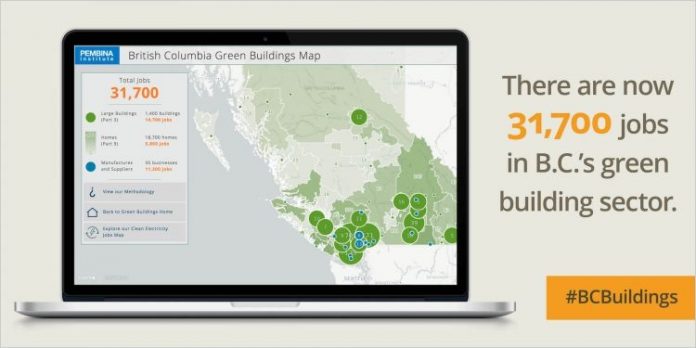 The job-creating power of the green building sector, a key driver of the clean economy, continues to grow in British Columbia.

The Pembina Institute has released an update to the British Columbia Green Buildings Map, an interactive resource that quantifies the jobs in the industry and pinpoints where energy-efficient homes and buildings are located in the province.

The latest research pegs the number of jobs in the green building sector at 31,700 — an increase from the 23,200 counted when the map launched in 2015, mostly due to growth in larger projects. Meanwhile, the number of green buildings in the province has risen to 20,100, with more than 750 of these built in the last two years.

While construction of new green buildings is on the rise, jobs associated with energy-efficiency retrofits for existing buildings declined by one-third over the same period. This can be attributed, in part, to the ending of the LiveSmart B.C. rebate program for homeowners in 2014.

The Pembina Institute is calling on the new B.C. government to ensure the green building sector continues to thrive — by investing in programs that will accelerate the upgrading of our existing homes and buildings, and make constructing low-carbon, ultra energy-efficient buildings the norm.

Pembina says a comprehensive strategy is needed to set a course for the building sector to help meet B.C.’s legislated 2050 climate target for carbon pollution.