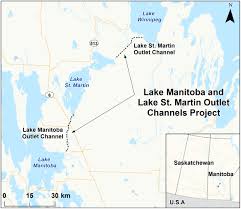 The Manitoba Heavy Construction Association (MHCA) has raised a red flag about the sole sourcing for the Lake St. Martin Outlet Channel project, with an overall value of $350 million.

In  a statement, the association says it “has consistently, as a matter of principle, and unequivocally opposed sole-sourcing of public infrastructure contracts.”

The March 8 announcement follows a MHCA communication last year when it expressed its initial objection to the access road contract sole sourcing.

“The MHCA Board and our industry support your government’s often-repeated commitment to abandon sole-source contract awards, except in emergency circumstances, in favour of value for money, open, transparent tendering which is the only assurance of lowest qualifying bid,” MCHA chair Greg Orbanski and president Chris Lorenc wrote in a letter to then Infrastructure Minister Blaine Pedersen.

We also support and work with local-content requirements designed to offer, in particular, training and employment opportunities for Indigenous communities where use of the policy makes sense and provides results.

“We cannot and do not, as a matter of principle, support sole-source contract awards for the access road or any publicly funded project. That assures neither value for money, nor transparency and accountability.

“If a policy objective of the project includes leaving soft or hard legacies for community outcomes, then we recommend use of the local-content requirements and/or the introduction of community enhancements components as line items which apply to any bid, but award the contract to the otherwise lowest qualifying bidder.

‘The market is very competitive.

Government has not only the opportunity, but responsibility to assure the public that taxpayer-funded projects, regardless of size, scale and scope, are delivered by qualified bidders offering the lowest qualifying price who can be held accountable based on experience and ability to secure bid bonds.

We ask that you and your government do as you said you would. Support open, transparent, tendering and contract awards through the competitive bidding process.”

CBC quoted current infrastructure Minister Ron Schuler as saying that work would begin this year on the project, with excavation of the channels starting in 2019.

Two partnerships, one involving Interlake Reserve Tribal Council with Sigfusson Northern and the other Lake St. Martin First Nation with Glen Hartman Construction, were awarded the contract without going through the tendering process.

Schuler confirmed the contracts were made through a single-source tender for an agreed-upon price.

“The reason is, and this is a one-off, that community has suffered greatly.… Basically their communities were wiped out,” in the 2011 flood, CBC quoted Schuler as saying. “This is part of an economic opportunity for them,” he said. “We think this is reasonable.”

“This allows those who are going back (to Lake St. Martin) to have some economic opportunity. We think that this is a very positive step,” Schuler said, emphasizing that not everyone is back yet.”