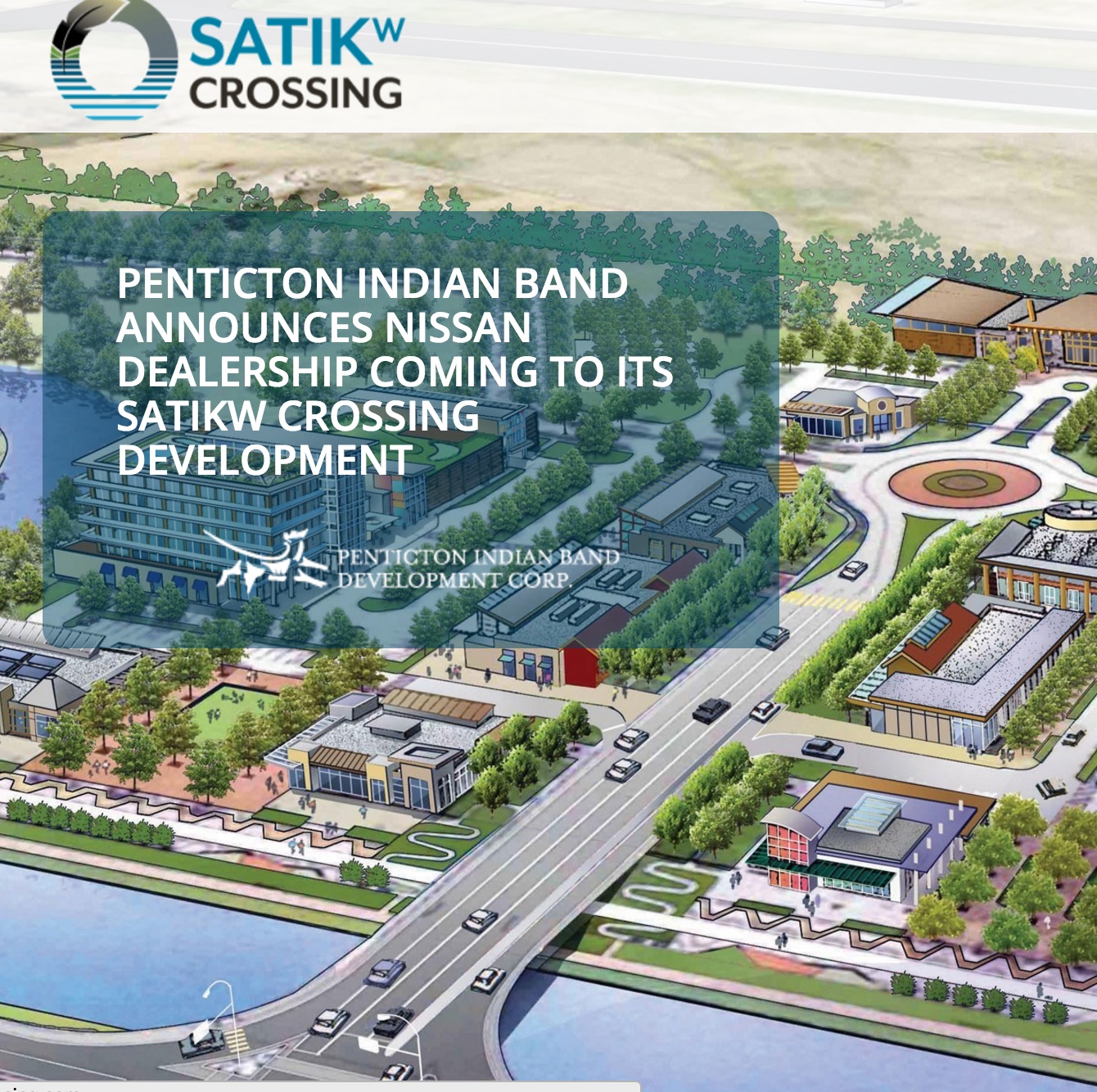 The Penticton Indian Band in British Columbia has issued a news release announcing an auto dealership will be constructed in its Satikw Crossing development, as the Band envisions more than $100 million in capital projects taking place on its lands within the next 10 years.

The commercial opportunity has been made possible because of the recently completed Satikw Crossing bridge, meaning “river crossing” in the Okanagan Sylix language, spans the Okanagan River Channel at Green Ave. in Penticton. The new five-lane bridge was financed by the Band to open up access for the first time to more than 140 acres (60 hectares) of prime development land adjacent to Highway 97 and the Penticton Regional Airport for residential, commercial, industrial and recreational uses.

“I’m very honoured and excited to work with the Penticton Indian Band and bring this fast moving automotive franchise to the Penticton community,” said Kot, who confirms lease negotiations are being finalized for the lease of a two-acre site.

“The Nissan lineup consists of very exciting vehicles and we look forward to the expansion of our operations to this beautiful area. The facility will boast a state of the art 16,000 sq. ft. building with Nissans New Image program,” he added.

More than 30 full-time jobs are expected to be created at the dealership when it opens in mid-2017, and more jobs during construction. Infrastructure work by the Penticton Indian Band to service the site is expected to start within 60 days.

The interest and inquiries for the Satikw Crossing development, also know as the Channel Lands, has steadily increased since the completion of the bridge as there has been a number of businesses who have already contacted the Penticton Indian Band Development Corporation, the news release says.

“Signing our first commercial tenant at Satikw Crossing proves that when you build it, they will come. This is the culmination of a 22-year journey to resolve legal, environmental and financial hurdles to build an $8 million bridge to the future that links our economies with the broader region,” Kruger said.

“By building and financing the bridge and infrastructure on the Channel Lands we demonstrate our commitment to help Locatees develop their vision for the lands they own.”

The Penticton Indian Band, with the largest reserve lands in British Columbia, has seen a flurry of development activity over the past three years. In addition to the Satikw Crossing bridge and commercial development projects, the Band has recently completed the construction of two major state-of-the-art community facilities – Sqilx’w Community facilities and the PIB Outma Sqilx’w Cultural School – both valued at more than $13 million. The new facilities are powered by geothermal energy.

Play Winery also recently opened at the Band’s Skaha Hills development. The 550-acre resort-residential development overlooking Skaha Lake sold out its first phase and a majority of its second phase and will eventually see over 600 homes, vineyards, a winery, walking and cycling trails built on this exceptional parcel of land.

“I’d like to thank our Band Council and our community for providing support on economic initiatives such as the Satikw Crossing. We are committed to work with all of our Locatees in helping them succeed with their business and development ventures. The Penticton Indian Band will be one of the strongest engines in the region for economic growth,” said Chief Kruger.

In making today’s announcement, Chief Kruger also thanked the federal government for their contribution to the Satikw Crossing infrastructure project, and acknowledged the City of Penticton and the Province of BC for their support as approvals for construction were being sought.