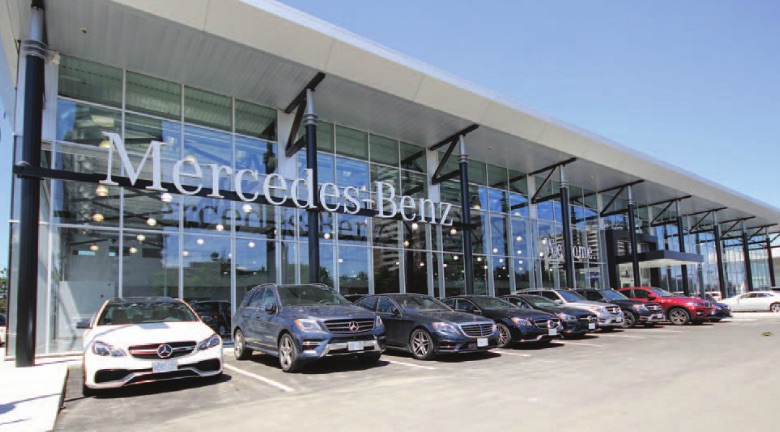 Richard Ziegler Architect designed the building at 228 Steeles Ave. W., while Fieldgate Construction Management Ltd. served as the project’s general contractor.  Steelcon Fabrication Inc. provided steel fabrication and detailing for the relocation and expansion of the corproate dealership that originally opened in 1988.

Two buildings on the 3.2 acre site were demolished in Nov. 2013, to make way for the new structure with three levels, two above-ground and one below.  The lower level includes an 18 bay service department and 118 underground inventory parking spots.

The dealership also houses a dedicated AMG Performance Centre and a smart (small car) Centre. An additional 43,000 sq. ft. has been earmarked for the service area, and includes 32 state-of-the-art work bays, six detailing bays as well as a six vehicle drive-through.

The release also noted “the layout of the new facility will follow the Mercedes-Benz proprietary Auto Haus design concept, which promotes the widespread use of glass to maintain transparency and create a bright, open concept feeling.”

Energy efficiencies have been built into the design through HVAC systems. An effort has also been made to reduce the site’s heat island effect, in part through the building’s white roof and  landscaping details.