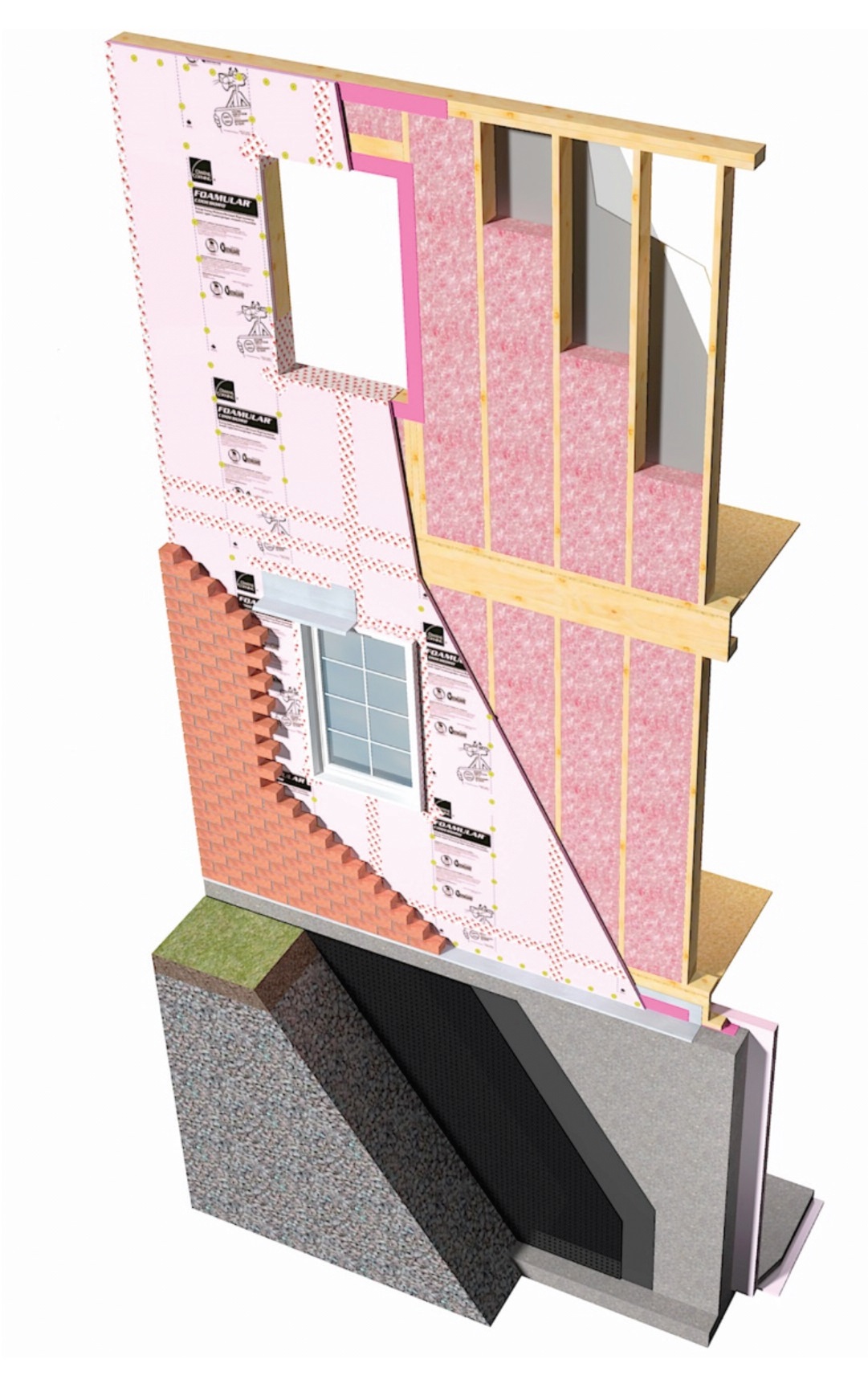 By Tyler Simpson
Special to Canadian Design and Construction Report

The 2015 National Building Code (NBC) now refers to “effective R-value” as opposed to “nominal R-value.” This change in language will impact residential construction in Canada. Nominal R-value took into account the thermal resistance of the insulation layer only, typically batt insulation placed between the studs. Effective R-value, on the other hand, takes into account the cumulative value of thermal resistance for all materials within the assembly.

The NBC’s authors have chosen to adopt the isothermal planes (series parallel) method for calculating effective R-values. This method breaks assembly components into two groups during calculation: Rparallel, which refers to all components that have parallel path of heat flow (assembly containing both framing members and cavity insulation), and Rseries, all continuous layer materials that overlay the framed cavity (materials such as exterior/interior air films, cladding, air space, exterior insulated sheathings or uninsulated exterior sheathings, and gypsum board). This cumulative approach factors in what the assembly was constructed of and indicates the actual thermal resistance of the entire assembly.

The main reason why the language has changed is thermal bridging. Thermal bridging occurs when a conductive material creates a path for heat flow to bypass the insulation layer, for instance a wood or steel stud. This shortcut significantly reduces the R-value of the insulation layer, lowering the overall performance of the assembly. For example, a 2×6 at 16” oncentre wood stud wall with R24 batt insulation has an effective R-value of 18.35 (a 23.5 per cent loss of R-value). Adjusting the assembly to steel studs further lowers the effective R-value to 11.88 (a 50.5 per cent loss of R-value). To minimize this loss of R-value, an insulated sheathing material needs to be placed on the exterior side of the framing members. When exterior insulated sheathings are installed they reduce thermal bridging in assemblies, allowing homes to lessen transfer of heat loss in winter and heat gain in summer, decreasing overall energy consumption.

NBC changed to effective R-values to ensure a portion of the total insulation of the assembly is placed outside of the framing members. The obvious advantage, as stated above, is lessening of heat loss or gain. However, there are supplementary benefits. When placing insulation outside of the framing member it allows the cavity to experience warmer temperatures. This increase in temperature has a twofold effect on the durability of the assembly. Firstly, increasing the cavity temperature moves the dew point from its traditional location inside the cavity to the outer surface of exterior insulated sheathing, where moisture can be drained in a properly detailed rainscreen. This limits the amount of moisture that sensitive cavity materials, such as wood or gypsum board, may encounter. Furthermore, small amounts of moisture from condensation that may form on the coldest days of the year will normally dry up due to the increased cavity temperature, before it has a chance to deteriorate the assembly.

How much insulation is necessary outside of the framing members to reduce condensation? It all depends on geographic location, but most parts of Canada will need R10 to R15 to limit condensation in the assembly.

An alternative tool that can be utilized is the Owens Corning effective R-value calculator (Visit: Insulation.OwensCorning. ca/Builders/Calculators/Thermal-Project-Calculator). The tool allows calculations for roof and ceilings below attics, roofs and cathedral ceilings, walls above grade, foundation walls below grade, floors over unheated spaces, and concrete floor slabs. 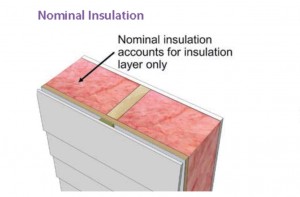 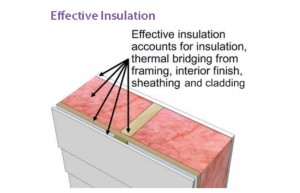 There is complete flexibility within the calculator to customize each assembly to how you build. Many options are available for framing types, spacing of framing members, various kinds of cladding, and several sheathing material options. The flexibility in the calculator allows the user to discover the optimum placement for insulation, thus maximizing effective R-value of the assembly. A detailed report of the calculation can be downloaded that provides thermal resistance for each component and the entire assembly. The report can be used during permit application as it is recognized and accepted by building departments across Canada.

It is a substantial adjustment in the construction industry when moving language from nominal to effective R-values. This change however, will allow the construction of more durable assemblies that lead to less associated health risks for the occupants, and the twofold effect of minimizing thermal bridging will lessen utility bills while allowing occupants to experience a more comfortable home.