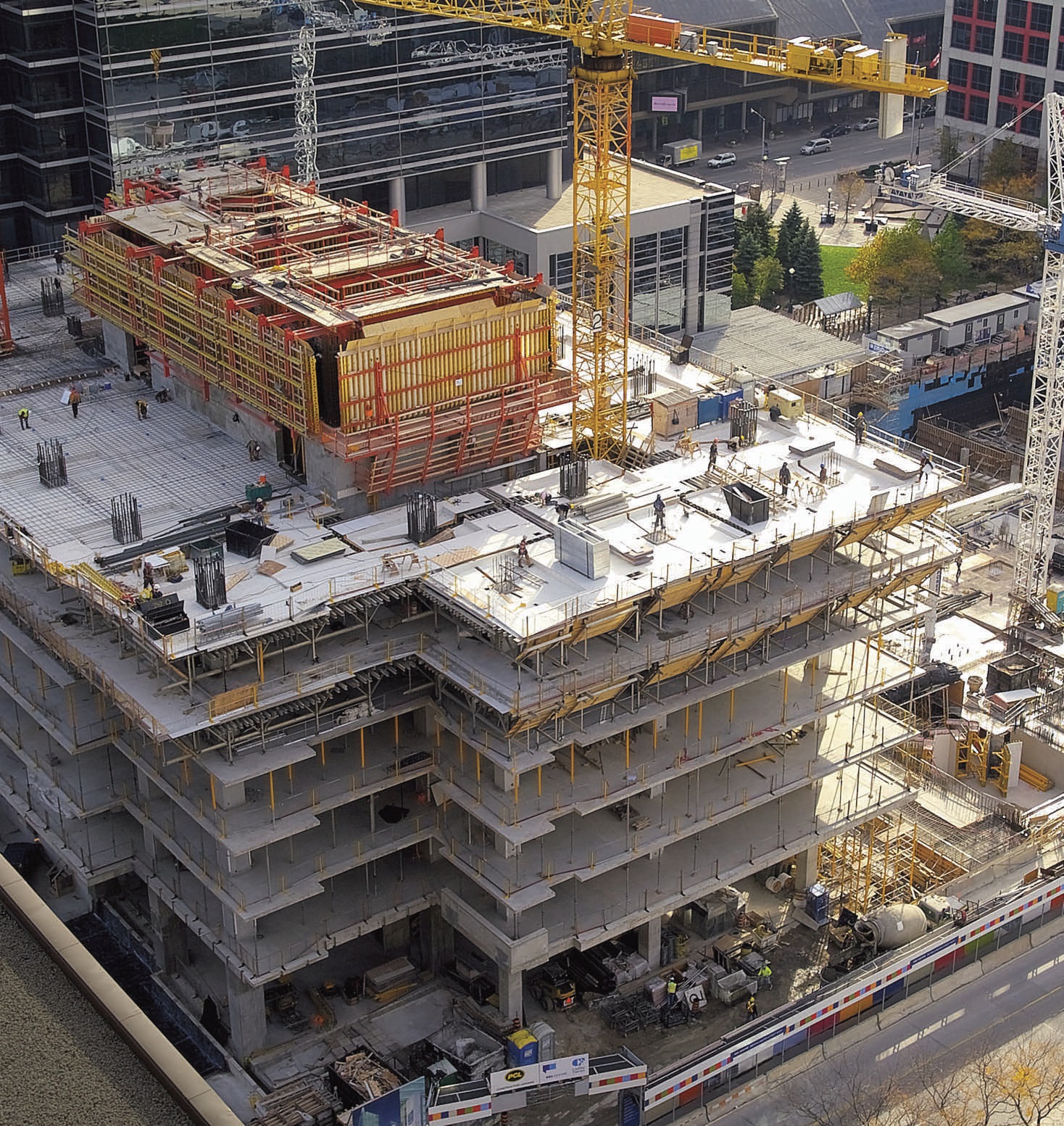 The expansion, designed to achieve LEED Silver certification, includes an additional ballroom, underground parking and more than 135,000 sq. ft. of third floor exhibition space. Existing space in the centre has been renovated and upgraded.

Matthew McInnis, Stuart Olson project manager, says his company’s role was to manage the project team, including the design consultants, trade contractors, and suppliers, to ensure the project’s requirements were met.

“Stuart Olson collaborated with the consortium of LM and Number10 Architects (LM10), along with Crosier Kilgour and Partners structural engineers, and SMS Engineering for the mechanical and electrical design to prepare the design for the new expansion.”

During the preconstruction phase, an integrated project delivery approach involving many meetings with key team members, resulted in the drawings fully capturing all necessary features. This, he says, minimized change orders during the construction process, streamlined the process, and also created cost certainty for the owner.

“Stuart Olson, together with the consultant group, also strategized on the design schedule; resulting in the overall design being broken up into various drawing packages to allow the tendering of work and material procurement to be done in a sequential fashion to suit the needs of the construction schedule on site.”

The phased design approach allowed for a fast track construction achieved between breaking ground in July 2013, and the first event in the new expansion in November 2015. This first event proved to be one of the project’s key challenges.

“It was originally planned that the first event in the new Convention Centre Expansion would be held in March 2016, however when the Grey Cup game was announced to be in Winnipeg during November 2015, meetings took place between the Grey Cup stakeholders, WCC, Stuart Olson, and the trades and consultants to determine the requirements for the Grey Cup festival, and to see how those requirements could be met with an accelerated schedule.”

Ultimately, McInnis says, all parties worked together to reprioritize work and provide additional resources, making the centre available for the Grey Cup Gala on Nov. 28. He says it was the largest attendance at any gala dinner in Winnipeg’s history.

“In large part due to the clear, open, and honest communication that took place during the numerous project meetings, all stakeholder groups gained an understanding of the challenges faced by the other parties in the group, and the stakeholders worked together to collectively mitigate these challenges.”

These open discussions, he says, also allowed the group to identify opportunities, resulting in the project remaining on schedule and on budget, while meeting the convention centre’s operational needs.

Aaron Redekopp, Allmar operations manager said the company provided a total opening solution. “Our ability to provide the mechanical and electrical hardware and manage the installation reduces the potential co-ordination errors, especially when multiple trades are involved. We provide a single point of accountability.”

He says the company conducted its own advanced planning to ensure a positive contribution to the project’s success. At the outset, Allmar aims to plan for any eventualities and try to anticipate changes throughout the project, he said. “Partnering with an experienced and professional general contractor like Stuart Olson makes this type of project much easier to facilitate.”

Fortunately, he says, Allmar is experienced in challenging projects. “Contractors know the potential for changes and the challenging requirements, and they trust our team to deliver. Our company has been built on our value added service and consulting expertise and that is especially demonstrated on projects such as this. We are committed to providing a safe and secure environment for the owner and the occupants, for the life of the building.”

Branko Demolition & Disposal Ltd. provided its waste management expertise, including providing roll off containers for waste and recycled materials. Owner and president Zelko Majetic says locating and removing bins at the downtown location created challenges. “There was no set schedule for removal or replacement but when the bin was full, it was taken, dumped and returned in a timely manner. This meant at some times, work had to happen during more congested periods of traffic.”

The new construction used white metal panels to tie into the existing building’s design and a bridge across a roadway joining old and new created a unique gathering space called the City Room. Able to hold 5,000 people, this 46,000 sq. ft. area features floor to ceiling glass 50 ft. high which will allow transparent views east and west down York Ave.

The centre’s downtown location originally set the convention centre on the third floor with truck access facilitated by a ramp to get traffic off the main streets. The new design adds a second truck ramp to the south so there is access now from both sides of the convention floor for greater flexibility.

McInnis says the expansion has been a major enhancement to downtown Winnipeg’s infrastructure. The larger facility, he says, is anticipated to draw interest from major conferences and exhibits, which will enhance tourism and awareness of the city’s many great attractions.

“The convention centre project is a legacy that will be enjoyed by many people from Winnipeg and all around the world, and it is an incredible honour to be part of the team that built this amazing facility.”

Branko says the project succeeded, to a large degree, due to Stuart Olson’s contribution and excellence. “All of the projects which we have been fortunate enough to work on with Stuart Olson have always been successful and held at a very high standard and we truly value the opportunity given to us during this project and all other projects which we have been involved with.”

McInnis says the project also highlights the success that can be achieved through the collaborative design- build project delivery method. “This is a major infrastructure project that was delivered on time and on budget, which is only too rare across the construction industry. Hopefully this project will serve as a model for future projects, and offer owners and project stakeholders an alternative to typical project delivery methods.”