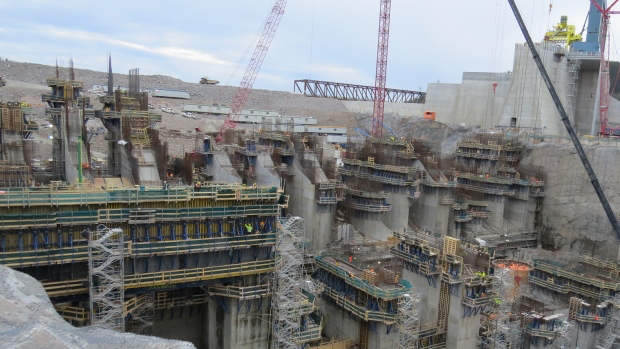 The Muskrat Falls Corporation has reached a $1.83 billion agreement with Italian contractor Astaldi to finish work on a powerhouse at the hydroelectric project in Labrador.

“All disputes and outstanding commercial items have been addressed,” Astaldi said in a news release from its Rome headquarters in late December

“The challenging work and its environment have made the negotiation process complex and we are satisfied for having reached this agreement,” said Filippo Stinellis, chief executive officer of Astaldi Group.

CBC reports that the original contract between the Nalcor Energy subsidiary and Astaldi was worth $1.26 billion, but the two companies argued over terms as the completion date was as pushed forward and construction costs ballooned.

Astaldi is responsible for construction of the powerhouse, intake and spillway.  The company demanded more money and arranged a “bridge agreement” last summer to continue work for the project then estimated to have a total cost of $11.4 billion, including interest.

However, Nalcor CEO Stan Marshall said in late December that number has increased by an additional $270 million.

“When I went in there in April, there was considerable uncertainty,” Marshall said. “The numbers would have been a hell of a lot more” if Astaldi was replaced.

“We have a great deal of confidence going forward,” but costs could still rise even more, he said.

For example, Nalcor expects some damage from ice in the Churchill River through the winter months, and if weather conditions are “catastrophic”, “all bets are off.”

The project is now two years behind schedule, with first power in 2019 and full power by 2020.