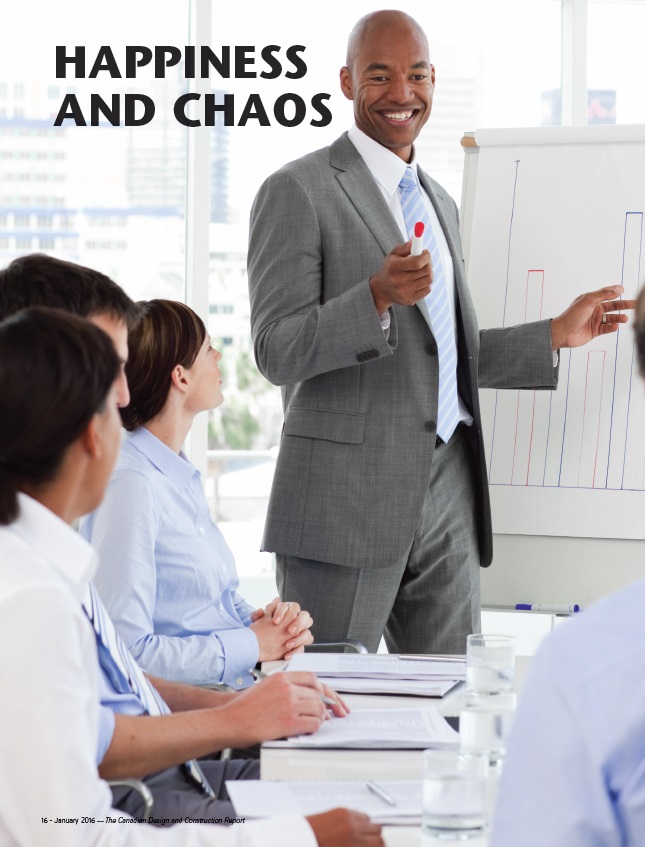 Special to the Canadian Design and Construction Report

There are fundamental mechanisms towards optimal behavior at the workplace, at home, or in a hobby. Inherently, all people, from babies to the elderly, want the same things in order to be motivated, and have happiness in their lives. The mechanisms they need are:

1. To be in control of their decisions;

2. To be appreciated, manifested by being listened to;

3. To feel they are contributing to something worthwhile;

4. To achieve success in what they are doing;

5. Upon achieving success, to move to the next level of task of increasing complexity, i.e. to learn;

6. To grow from that learning; and

7. To be allowed to make mistakes, since mistakes create the deepest learning imprint.

Respect is ensuring all of the above for those who report to, or otherwise connect with you. It is the foundation of employee happiness.

Sometimes called Bottom-Up Management (BUM), the most effective approach to business management is to get ALL employees involved. By that means, it gets each employee committed to the company’s purpose and has all employees feeling good about themselves. This approach is based on two ideas, one simple and one complex.

The simple idea is that if a company of 100 employees listens to the inputs of all one hundred people, each with a connection to a unique expertise, special clients or suppliers, the data that will result will be far more informative. Compare that with the data that comes only from a ten-person executive team, with its limited top down view; ninety people are only partially heard from. The multiplying power of the whole assembly results in much better insights compared to just considering the views of an elite (but often well meaning) group. A gathering of eight people will have 30 to 50 ideas on a subject in total when canvassed independently. Put into a collaborative safe environment these same eight people will conduct an exchange of more than 600 ideas within a two-hour time span.

Bottom-Up Management is based on the idea that local decisions, if allowed to develop on their own, will result in elegant global solutions. Called Chaos Theory, this is how beehives operate, carpenter ants, embryo development, snowflake evolution, even the brain adaptation to a significant flaw (such as a blind person having the visual portion of the brain adapt to an auditory role). Chaos Theory, in fact covers the whole gamut of nature.

Quite simply, it is the order of the universe. The management techniques espoused herein simply imitate nature’s system that works very well. Darwin discussed his discovery of it in his treatise on evolution and today many knowledgeable people continue to explore this concept with quiet amazement.

There is evidence in published reports (such as an article in the National Geographic) about how people are copying some of nature’s wonders: Mercedes Benz copying the dynamics of the boxfish for less drag on a superior automobile that gets 70 miles to the gallon; NASA copying the common burr to assist in the development of Velcro; Speedo emulating shark skin to reduce water friction and hence having increased the speed the swimmers; Stanford University taking advantage of the incredible grip of the gecko lizard (with its 6.5 million hairs per toe) to create a search and rescue robot.

Editor’s note: Elsewhere in this issue of CaDCR you can see how termites have provided inspiration for the design of a zero energy Amsterdam hotel.

• “The Blind Watchmaker” by Richard Dawkins

• “Leadership and the New Science” by Margaret Wheatley

Bill Caswell, B.Eng., P.Eng., is a coach of CEOs, founders and presidents of international companies. and has a history as a radar design engineer and helping NASA launch 200 scientific rockets into the upper atmosphere. He leads Caswell Corporate Coaching Company (CCCC) at www.caswellccc.com.